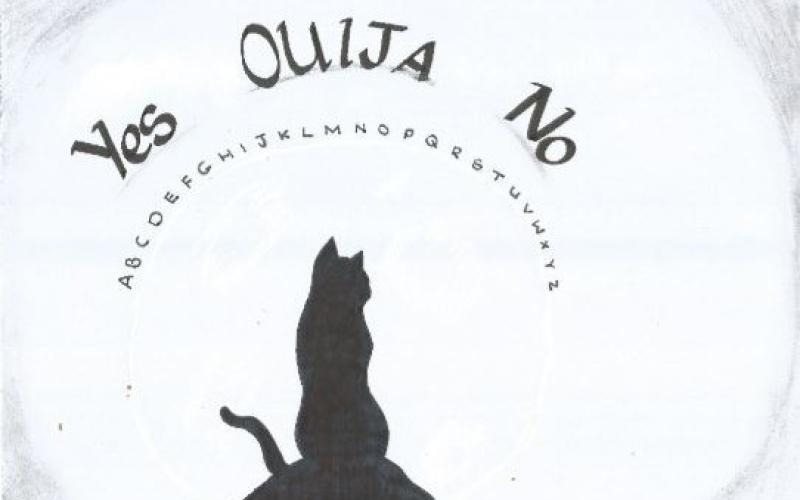 The Longford Leader New Writing column provides the creative writers of Longford with an opportunity to share their work with a larger audience. If you have a piece of writing - poetry, prose, etc - you'd like to see published in the Longford Leader, email newsroom@longfordleader.ie with a submission of no more than 1,000 words.

I always heard to never go near an Ouija board, and that it’s not a game. I listened to people, until last Halloween night.

I was with my two best friends at the time, Sarah and Alex. We were watching videos online about Ouija board experiences. Some looked real, but others not so much, so we didn’t get much of a fright from watching them.

The videos consisted of the same things; the planchette moving on its own, candles being put out randomly and creepy sounds.

Sarah was sceptical and wanted to try it out for herself. She begged us to go to the games shop down the road with her but Alex and I kept refusing. Alex finally gave in, so I guessed I had to as well.

We arrived back home with the board. While Sarah and Alex were setting it up I researched how to use it and what were the risks.

“Stop being such a scaredy cat,” said Sarah, but I wasn’t taking any risks. The first thing that popped up on my phone was about how dangerous the board is, but I tried to ignore it.

“Do not play alone, do not mock spirits in any way,” it read. “If planchette makes number ‘8’ figures, immediately say ‘goodbye’. Do not burn board when finished.”

I began to worry. It was too late to back out. We all placed our hands on the board.

“Is anyone here?” asked Sarah. There was no response. She repeated herself. Still no response.

“I told you it was all fake -” the doorbell rang. We all froze. Alex quietly stood up and shifted towards the door. The door flung open.

“Pizza delivery,” said the tall man outside. We all sighed.

“I forgot I ordered that,” said Sarah, feeling relieved. We all had a slice and headed back to the board. I filled them in on the warning signs, but they didn’t really pay attention.

“Is anyone he-” The planchette flew to ‘YES’. We all glanced at each other.

“Who moved it? This isn’t funny!” Alex and I both promised it wasn’t us, but she didn’t believe us.

“Fine, can we just finish this stupid game?” she grunted.

Just then, the planchette moved to ‘NO’. We all swore again that it wasn’t us that moved it. It quickly started making number ‘8’ signs. We all freaked out and left the room without saying goodbye, which was a terrible idea.

“We have to say goodbye!” I shouted. The power went out. Sarah let out a piercing scream. “Help!” she cried. The power came back.

Sarah was on the floor, panting like a dog. She burst into tears. “Something grabbed my leg!” We both tried to calm her down. Her eyes slowly fixed on something behind me.

“What are you looking at?” I asked. She didn’t reply. I turned around to see a six-foot-tall dark figure hovering above me. I couldn’t move. The lights flickered off again.

I sprinted to the living room to where the board was, stumbling along the way. I grabbed the board and hurled it into the fireplace. The lights flickered back on and Alex came in along with Sarah.

The fire crackled. The smell of smoke was overpowering. There was a dark presence in the room. Alex shuddered and looked at me.

“You’re not supposed to burn the board, remember?” My heart dropped. I knew I had just made a huge mistake. We watched as the board morphed into black.