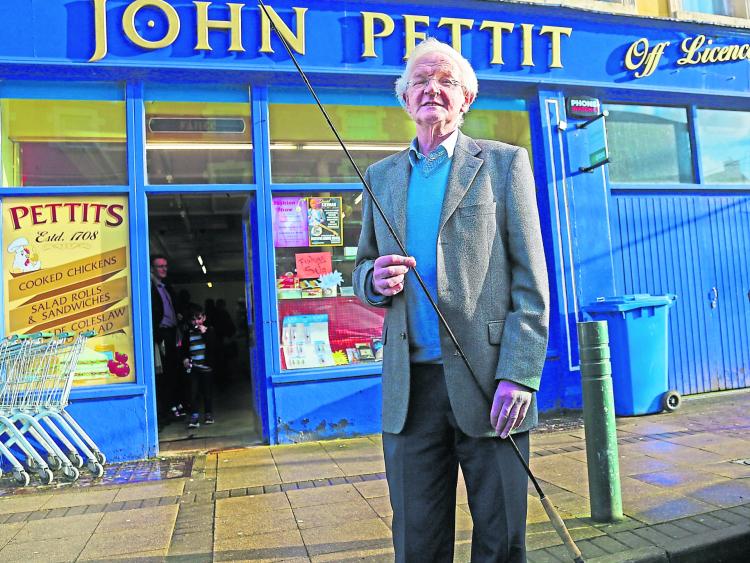 End of the line... John Joe Pettit outside his shop in Granard at the weekend. Photo: Shelley Corcoran.

It was the iconic poet Geffrey Chaucer who coined the phrase: ‘All good things must come to an end’.

A cliché it may be, it's one which could be used to sum up the overriding sense of emotion and nostalgia in Granard at the weekend as the shutters on Longford’s oldest business came down for the last time.

Pettit’s, a dainty, uncomplicated grocers stationed in the heart of Granard’s main shopping thoroughfare has been its ever present mainstay since 1708.

To put it in context, that’s 310 years ago, at a time when Ireland was ruled by King George III of Britain and beset by economic oppression.

The Leader caught up with him last Saturday morning for a chat. For the past fifty or so years, it was like the start to every other weekend as shoppers drifted in and out for a pint of milk and butter or for their first read of the newspapers.

This, though, wasn’t your run of the mill Saturday as John prepared to close the doors on the family run business for good.

As we entered the store, we were greeted by a tall, amicable looking figure who immediately threw out his hand.

“You're from the Leader,” came the instantaneous greeting.

It was a reception which made us feel at ease straight away and one which was very much indicative of how this family-orientated business has survived famines, recessions, wars and still lived to tell the tale.

“It's been in the family since then,” said John, when asked about the shop’s lineage.

“I'd say it is the longest running in the county.

“The shop was called Small's at that time but I think that was to do with the French or something because it would have been contentious to have the name Pettit on a business.”

An unfortunate coincidence it may have been at the time to carry such a surname over your door, by the early 20th century none of that figured as Ireland battled for its rights to independence with the might of the British Empire.

Pettit’s, like so many other establishments of its ilk came under attack from a Black and Tan onslaught, the results of which had near devastating consequences.

“Every second or third building was set alight as they thought they were going to burn the whole town,” said John Joe as he recalled the so-called Burning of Granard.

The business, at the time, boasted a downstairs cellar which provided candles to various clients and local churches.

As a consequence of the British aggression, its entire contents went up in flames, leaving the business to effectively smoulder for two years.

“It didn't succeed and thank God they didn't as it would have been some mess,” John Joe added.

“My father, Joe had it (shop) at the time. He was only 17 or 18. His father had died quite young and his mother was running the business along with some of the family and they carried on the business from the yard.”

That perseverance and tenacity was something which clearly rubbed off on the young John Joe when the time came for his father to hand over the reins of the family firm.

The internal fabric of the store was much different back then. A bar straddled across the rear of the premises where its deli counter now stands.

“I remember, as a kid, the counter was different,” interjected John Joe, while pointing to how bar stools occupied much of where the store’s till and confectionary stand had more recently been positioned.

“You got out your docket book and you started writing and people might be in once a fortnight whereas now you might see them three times a day looking for a pound of tea, four of sugar, two of butter and flour and the like.

“Nearly before a person opened their mouth you knew what the first eight items were going to be.

“I remember there were 19 lines in the docket books back then and if you got onto the second page you were doing rightly.”

How times change. The times of scribbling orders on ledgers has long gone. The modern age has forced society and business at large to adapt, challenges which John Joe has taken on and embraced.

One facet of the business he has not altered, however, is the proud name of Pettit, which towers proudly over its front curtilage.

“Over the years, many groups would come to you like Spa and we were with Mace for a little time but I since decided that all these groups, all they were out for was their own good and I said: 'No, I will do it the way my father did it' and I've enjoyed every minute of it. I have had a brilliant, brilliant life. You know the old saying: 'You find a job you like doing and you will never work again'. That's the way it's been for me.”

It was humbling to hear such contentment with not a morsel of regret come from a man who has spent the vast bulk of his life serving a community he has grown up in.

For others, the term ‘customer’ would mean just that. For John Joe, it means so much more.

“Everyone that came in was your friend,” he said, revealing that it was his loyal clientele were showing more emotion than he was in the weeks leading up to his final day behind the counter.

“I thought I would be caught but it's actually the customers who are breaking down. It does take it out of you and you do feel it but it’s the part of it I love.”

That said, John Joe was keen to exemplify the unrelenting challenges facing seasoned businesses like his own.

Tighter balance sheets, he asserted, have come largely as a result of increased competition from larger supermarket chains, threats which have been exacerbated by mounting overhead costs and even more trivial dilemmas such as Granard’s ceaseless parking dilemma.

With no sons or daughters to pass the shop down to, you would think John Joe’s decision to call time would be made that bit easier.

“It’s not about that,” he replied, folding his arms in quiet humility.

“I absolutely loved it, but financially you couldn't survive. I would nearly say 'I'd spend my last penny to keep it open' but you can't be stupid either.”

Now, and as the affable wildlife enthusiast looks forward to his next chapter, there's an unmistakeable satisfaction in John Joe's voice as he offers his hand to yet another customer who files through the door.

“The way I see it and have seen it for some time is, you only live for so long and when you get to a certain age you say to yourself: 'Listen, there are things I have wanted to do all my life and I want to do them when I am able to'.

After close to half a century manning an institution with more than 300 years of history attached to it, who could blame him?