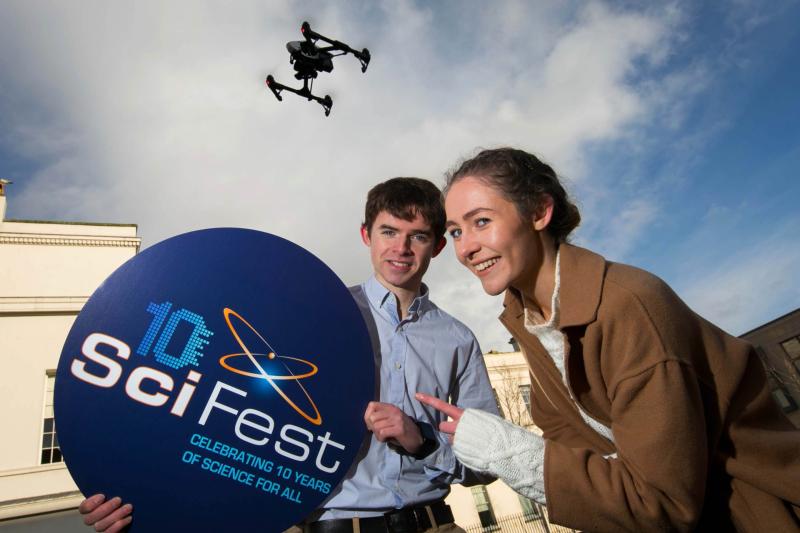 The minster of Education and Skills Richard Bruton TD lanches Scifest and calls for Longford secondary students to take part. Scifest is one of the most inclusive and largest science fairs in Ireland. About 50,000 students participated and that number grows by 23% each year.

Speaking at the launch of SciFest 2018 at the Department of Education and Skills in Dublin, Sheila Porter, SciFest Founder and CEO said: “2018 marks 10 years since SciFest was first launched. In 2008, I could not have imagined how much SciFest would grow, and how successful it would become. I am delighted to be here at the launch of SciFest 2018 and I want to encourage all second-level students in Longford with an interest in STEM to get involved and experience the excitement of being part of the SciFest programme. Last year over 10,000 students participated across the country and I am sure this year will be even more successful.”

Richard Bruton TD, Minister for Education and Skills said: “I’m delighted to launch this year’s SciFest and I’d like to congratulate the team on the 10 year anniversary of the programme. I’m passionate about ensuring our young people are given the opportunity to develop an interest and a passion for the STEM subjects and our recently launched STEM strategy emphasizes the Government’s commitment in this area. Problem-solving, creativity, critical thinking and adaptability are just some of the key skills that students develop in learning the STEM subjects – these skills are crucial in preparing our children to flourish in a modern society. I especially welcome and encourage outside of school initiatives such as SciFest and I’m really looking forward to seeing this year’s projects.”

Congratulating SciFest on reaching its ten-year anniversary, Dr Ruth Freeman, Director of Strategy and Communications at Science Foundation Ireland said: “SciFest is an excellent initiative that really puts into practice Science Foundation Ireland's aim to grow awareness and knowledge of STEM among young people in Ireland. We are delighted to support this nationwide education initiative though our SFI Discover Programme, which is working to make science accessible to all and highlights the importance of scientific enquiry. It is inspiring to see how SciFest has grown over the past ten years and I am sure that 2018 will be another hugely successful year."

In SciFest, second-level students showcase STEM projects at a series of one-day science fairs held locally in schools and regionally in the 14 Institutes of Technology, DCU and St. Mary’s College, Derry. The winners from each regional science fair will go on to compete at a national final in November 2018. The winner(s) of the SciFest National Final 2018 will be presented with a trophy and will represent Ireland at the Intel International Science and Engineering Fair (ISEF) 2019 in Phoenix, Arizona.

Last year’s overall national final winner was Aaron Hannon, from St Muredach’s College, Ballina, for his project on a shaving device for people with limited hand dexterity. Aaron will represent Ireland at the Intel International Science and Engineering Fair (ISEF) 2018 in Pittsburgh, Pennsylvania in May.

Longford students wishing to follow in Aaron’s footsteps can log on to the SciFest website (www.scifest.ie) and enter online. Completed entries must be submitted by Friday, March 9 or Friday, May 11 in the case of St Mary's College, Derry.