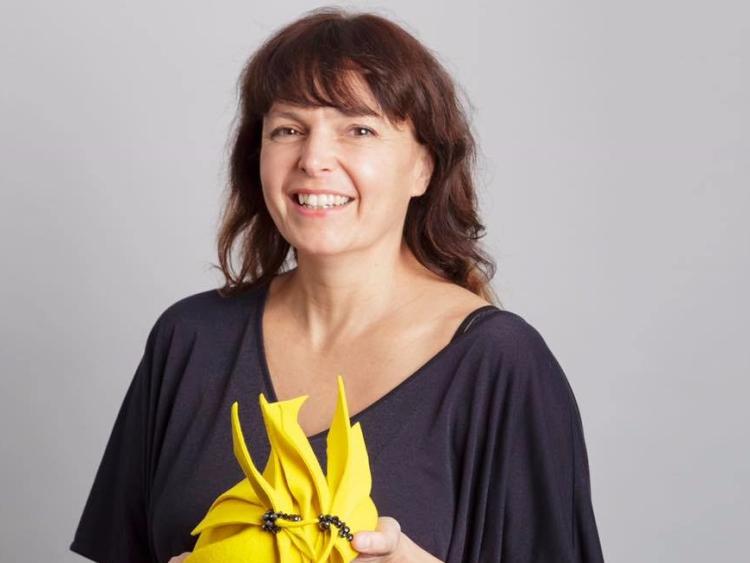 Local stylist, Wendy Louise Knight will be hosting a workshop at the Aisling Festival on Wednesday, October 25 from 4-5pm.

Wendy was born in the United Kingdom but is now situated outside of Newtown Forbes.

Wendy is an immensely talented milliner who has made a career for herself selling fabulous women’s hats of her own design.
She has prior experience with the Aisling Festival when she mentored TY students from Scoil Mhuire, Longford, on a project facilitated by the Aisling Festival.

Wendy taught the students Millenary skills, enabling them to create hats based on the theme of 1916, which they wore in the parade.

Aisling Festival reporters, Declan Craig and Luke Casserly spoke to Ms Louise Knight and asked her a few questions about her career and her involvement in the Festival.

How did you get started as a milliner?

I have always adored hats and millinery and have always sewn. My grandparents had a small hat factory in Luton England so I suppose it is in the blood. I studied photography in college and did various jobs in the UK. When I moved to Ireland 18 years ago I saw an opening for bespoke Millinery and the rest is history.

How did you train to become a milliner?

I started off teaching myself by deconstructing hats and working with the fabrics to see what was possible. At the time, the only millinery course in Ireland was part of a fashion degree in Dublin and as I had very young children, that wasn’t a possibility.

I found a retired teacher from Grafton Academy who gave me private lessons - I didn't have the luxury of being able to intern with a designer.

Do you design any other clothing pieces?

I produce a casual range of retro headbands and cotton baby hats. I also work alongside a local bridal designer who uses my studio for fittings and consultations.

What skills does a person need to become a milliner?

Well obviously an eye for colour and 3D design, sewing skills, lots of patience, the ability to work to deadlines and most of all to be a people person as you have to be able to work with clients.

Who or what is your biggest inspiration?

I would say the fabrics I work with inspire me in the first instance, followed by looks and muses from the archives when hat wearing was more widespread. Using these ideas and collaborating with modern shapes and new ways in thinking, hats have become more like pieces of art. Milliners and fashion designers I aspire to would be the likes of Vivian Westwood, Alexander McQueen and Steven Jones.

Is your field of work dominated by female designers?

Not at all. I know many highly skilled and exceedingly successful male milliners.

What is the funniest request you’ve ever gotten for a design?

Do men get hats made?

Yes, I don't have any men’s sized blocks but if there was a demand I would make them as the process is the same as women’s hats.

Who would you love to make a hat for?

Jay from Jamiroquai and Victoria Beckham.

Do you have an iconic or typical design that people could associate your name with?

I work a lot in peachbloom felt using iconic pillbox shapes with a modern twist.

Do you think Longford people are creative?

I would say yes but a lot of my creative associates are blow-ins like myself! But there is a lot of local talent. I think the craft and design area is sometimes not considered a real career which is a shame.

What are you looking forward to this year’s Aisling Festival?

This year I am taking an hour workshop with children from age seven upwards, making funky headbands using scrap fabrics and bits and bobs.

You worked with Aisling Festival before - tell us about your 1916 project and the inspiration behind it.

The inspiration really came from a discussion with the girls involved, we had a brief of the 1916 rising but we just asked the girls to explore the history and look into ideas for the hats from there.

We also took an emphasis on the forgotten women of the rising. Many of the girls involved were non-nationals and had a different concept of the rising and war.

I totally gave the girls free range and guided them on how to construct the hats. It was an inspirational project.

If people are interested in taking part in your workshop do they need experience or need to bring materials?

Contact Aisling Festival as places are limited. No materials or sewing skills are necessary.

Are there any other projects you are involved in?

I am involved with a new four-county craft network, Inside Craft, bringing together artists and crafters from the four regions with funding that came out of USEFA, the enterprise boards and EU funding.

We have been working hard to produce a network website, new craft trail and a series of pop up shops.

The Longford phase will kick off alongside the Aisling Festival on October 22 in the Backstage Theatre, where our pop up shop will be showcasing high-quality art and craft from the four counties, which will be available to purchase. Check out www.insidecraft.ie.

I have also just worked on a creative project with the Council of Irish Fashion Designers (CIFD) in conjunction with the Westbury Hotel in Dublin.

National milliners were asked to produce a hat, which the head pastry chef transformed into a cake-inspired afternoon tea. The hats were then displayed in the Westbury Hotel and the art of Millinery afternoon tea was served for a month - a great honour!

Wendy Louise Knight’s workshop can be found at the Aisling Festival on Wednesday October 25 from 4-5pm. You can also find Wendy at Wendy Louise Designs on Facebook.