'Gaelscoil Longfoirt will always be very dear to my heart'

After 20 years at the helm of Gaelscoil Longfoirt, principal Yvonne Ní Mhurchú moves to pastures new 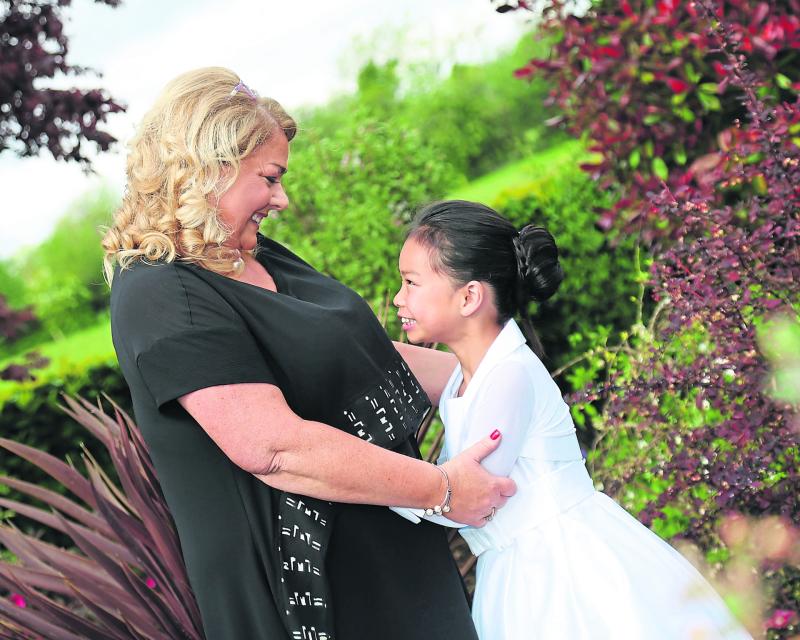 In just under three weeks time well-known principal of Gaelscoil Longfoirt Yvonne Ní Mhurchú will resign from her position so that she can take up a new role within the Department of Education and Skills.

The Newtownforbes native has been at the heart of Irish language education in this county since the inception of Gaelscoil Longfoirt back in 1998.

She has been there since the very beginning and it is a place that will always remain very dear to her heart, as she says herself.

Married to Michaél, the couple have one daughter Doireann who is also a pupil of Gaelscoil Longfoirt.

When Ms Ní Mhurchú was appointed principal of the school 20 years ago her appointment was made on a Tuesday and she and her husband Michaél were married the following Thursday - just two days later.

She was also at the helm of the school when she and Micheál successfully adopted their adored daughter and again when her beloved father Peter died nearly six years ago.

No matter what was happening in Ms Ní Mhurchú’s life, Gaelscoil Longfoirt was there keeping her grounded.

The decision to leave and start something new was not an easy one to make, but the Longford woman is now looking forward to the new challenges that lie ahead in her new role as Primary District Inspector which will start on September 1 next.

Now there is almost 200 students at the Gaelscoil, from all backgrounds and religions, making it one of the most inclusive Irish language primary schools in the country.

There are also 12 teachers with the possibility of more come September.

None of this, says Ms Ní Mhurchú would have happened were it not for the hard work and dedication of so many people.

The position of Primary District Inspector within the Department of Education came up nationally and the local and very well known principal decided to throw her hat into the ring.

Why not? She thought, if I don’t do this now, I might never get the opportunity again!

However, deep down she didn’t believe she would get the job, and, so when the letter of congratulations came in the post, the Newtownforbes native and mother of one found herself having to make some serious decisions.

“It took me about three months to reflect, think about it and weigh up the pros and cons,” she smiled as she recalled those weeks in the aftermath of the job offer.

“When I decided to take the position I was notified that it would commence on September 1.

“I announced it then to the school community - board of management, staff, parents and students just after Easter.”

She says that by doing that when she did, she afforded everyone the opportunity to get used to the idea that she was leaving, while at the same time ensuring that she wasn’t going to disappear off the face of the earth and would continue to work through the whole process with them.

“I will be handing over to a new principal when the holidays begin in about three weeks time and I believe it will be a smooth transition,” she continued before adding that her new job would include the inspectorate of all primary schools in Ireland, not just Gaelscoileanna.

This, adds Ms Ní Mhurchú is something that she is looking forward to, despite what she will be leaving behind.

Meanwhile, it has been an incredible journey for Gaelscoil Longfoirt and for Yvonne Ní Mhurchú whose daughter Doireann is a 2nd class pupil at the school.

“We have always celebrated the successes of the school along the way, but there has been some very bumpy parts along that road,” she explained, before pointing out that from little acorns mighty oaks do grow.

“We started out with 20 students - that was the magic number needed back in 1998 to open a Gaelscoil.

“We got fabulous support from parents for Gaelscoil Longfoirt from day one and it would not be the success it is today without that support.

“The door has always been open between myself and the parents and I hope going forward that same ethos will reign.”

Ms Ní Mhurchú adds that research has already proven that when parents are involved in the education of their children, there are better outcomes for those children. “I have seen that first hand at Gaelscoil Longfoirt,” she smiled, and one thing she is very proud of is the inclusive nature that has become Gaelscoil Longfoirt.

This she says is unique to Gaelscoils in general and means Longford’s school bucks the national trend.

Many feel there is an elitist element to Gaelscoileanna and Ms Ní Mhurchú is quick to point out that while, yes, this is the case in many parts of the country, it is not the trend in Longford.

“Because Gaelscoil Longfoirt is the only one of its kind in Longford it draws children from all over the county and not just from Longford town.

“We have members of the travelling community, members of the international communities, Longford town born and bred; we have people that have moved to the area from other parts of the country and indeed the world, so our school is a very, very inclusive school.

“It is not at all elitist and everyone is treated the same.

She says that the purpose of gaelsoilenna is to ensure that children become bilingual and with bilingualism there are many, many advantages, she adds.

“I am very happy now that I will be a mammy and a parent at Gaelscoil Longfoirt after this and I will be able to help out like the other parents and mammies.

There will also be an increase in staff numbers, smaller class sizes, larger budgets for numeracy and literacy projects and a strengthening of further links between the home school liaison officer and the students’ homes.

“All of this will hugely benefit us at the Gaelscoil and we are all looking forward to implementing that,” Ms Ní Mhurchúconcluded.