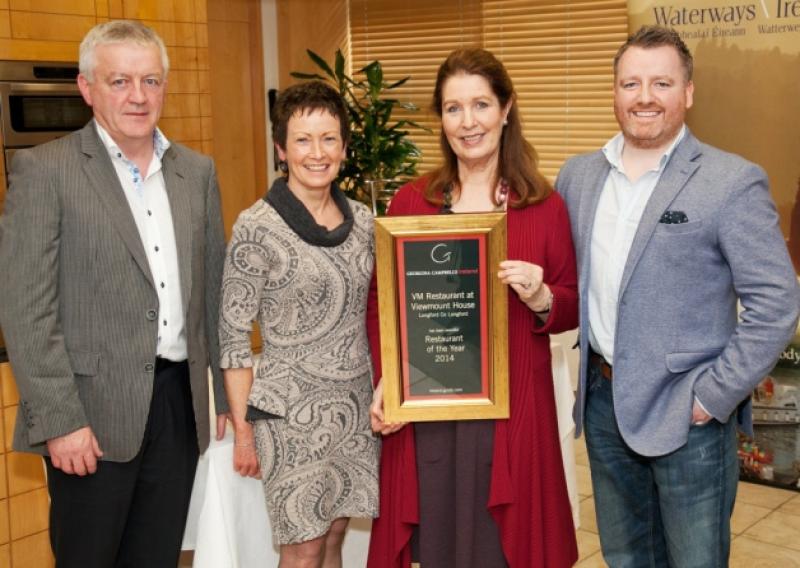 Viewmount House’s VM Restaurant in Longford town has been awarded the Georgina Campbell Restaurant of the Year 2014.

Viewmount House’s VM Restaurant in Longford town has been awarded the Georgina Campbell Restaurant of the Year 2014.

The prestigious accolade was bestowed on Beryl and James Kearney, owners of the establishment, and their dedicated team at a ceremony last week.

Tributes have been paid to Mr and Mrs Kearney, and to head chef Gary O’Hanlon by local people including the town mayor, Cllr Paul Connell and CEO of Longford County Enterprise Board, Michael Nevin. “Congratulations to the Kearney Family, who won first prize for the best restaurant in Ireland,” the town mayor added. “As Mayor of Longford, I would like to congratulate them on behalf of all of the people of Longford. It was a truly fantastic achievement.”

Meanwhile, Mr Nevin who attended the enterprise awards in Viewmount House last Wednesday, said, “Congratulations on your fine achievement; I think that Viewmount House is a role model for all small businesses in Longford - you strive for excellence and the Georgina Campbell award certainly acknowledges that excellence”.

Speaking about the win to the Leader, Beryl Kearney said that it was an acknowledgement of the “dedicated staff” and “quality of food” at Viewmount House. She also pointed to the wonderful atmosphere at the establishment and the “sense of occasion” that is evident.

“Viewmount offers high quality food, excellent atmosphere and when you come here, there is a real sense of occasion,” she said, adding that diners were also very impressed by the beautiful period house in which the restaurant is situated. “We change the menu seasonally and we use fresh local produce - which is what it’s all about.”

In her tribute to Viewmount, Georgina Campbell summed it all up when she said, “This is a restaurant which is much more than the sum of its parts”.

She added, “Since opening in 2008 it has made this midlands town a destination for food lovers throughout Ireland, and beyond - changing the image of the area and creating employment, both directly and indirectly. Its setting, in four acres of beautiful wooded gardens is lovely, and the gardens alone merit a special visit. Suppliers are credited with pride and the cooking is outstanding, with all the little niceties observed - yet the best thing about this elegant and atmospheric restaurant is that it’s in no way intimidating.

“This is fine dining with a difference and its success is well deserved by James and Beryl Kearney, Head Chef Gary O’Hanlon and their team.”