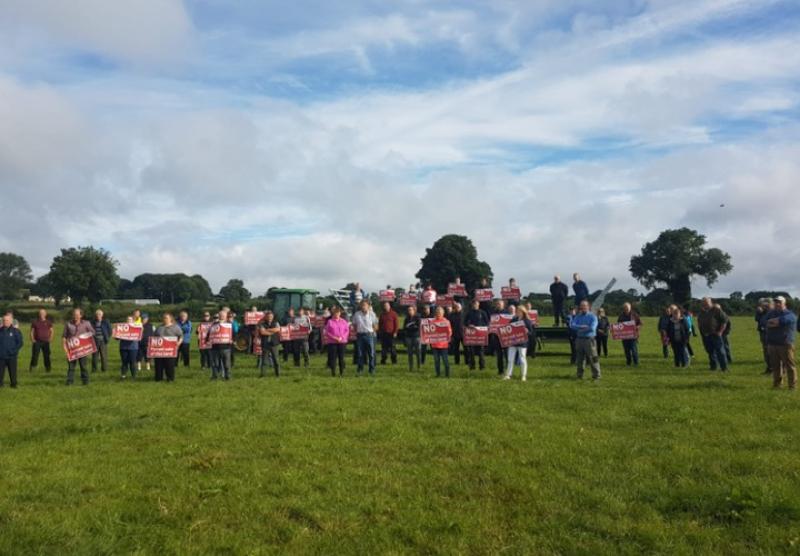 IFA members and members of the community were out in force to protest against the sale Picture: IFA/Facebook

A  midlands family farm that was due to go up for sale on Thursday against the wishes of the farmer has been removed from auction after the community came together to protest the sale.

The Conway family farm near Rhode was removed from an online sale following a protest at the family farm by the Rhode branch of IFA and the Offaly County Executive with the full support of IFA nationally and the local community.

The BRG Gibson Auctions website has reported that lot 12 a 90 Acres Non Residential at Coole, Croghan, Rhode, Co. Offaly was withdrawn from an online auction.

The property was due to go under the hammer at an unconditional online auction on Thursday, July 29 at an advised minimum value of €420,000. The property was marketed at investors.

The Chair of IFA Debt Support Service, Martin Stapleton, has now called on vulture fund "Everyday" to engage constructively with IFA to agree on a solution with the Conway family.

"It is regrettable that this action had to be taken. Earlier this week, the IFA put forward a very reasonable offer, on behalf of the farmer, but Everyday Finance rejected it," said Rose Mary McDonagh, IFA Farm Business Chair.

He said, "we sent a strong message today that this type of behaviour by vulture funds is not acceptable. Farmers, their neighbours, IFA and the farming community, in general, will not stand by and allow individual farmers to be picked off," he said.