‘By working together we will achieve a lot more’ 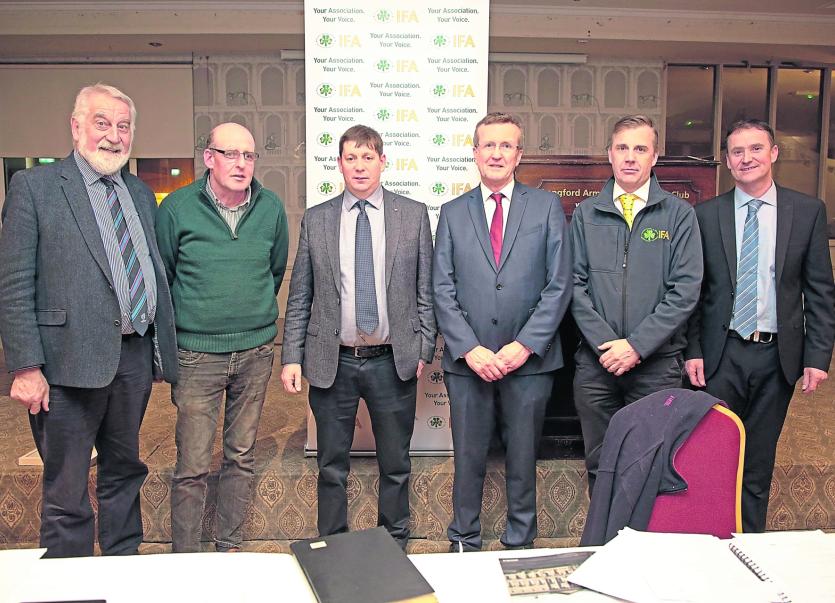 At the Longford IFA AGM in the Longford Arms Hotel on Wednesday evening, February 19, recently elected National President of the IFA, Tim Cullinan, was present to meet with local farmers and discuss some of their concerns for the year ahead.

When speaking to the Leader, Mr Cullinan spoke of his delight at his recent election, before noting the many challenges ahead.

He said: “I am delighted and absolutely honoured to have been elected the 16th president of the IFA.

The IFA president said the key challenges for him were CAP reform, Brexit and climate change. On climate change, Mr Cullinan committed to pushing for farms in disadvantaged areas to be viewed as carbon sinks and says farmers have become easy targets for larger corporations and government.

“If you look around us, What we have here is all green grass. We are an excellent carbon sink, between our hedgerows and our trees. None of this is being accounted for at the moment,” he said.

“We need to get the science looked at on this. We had a conference recently where we brought in an expert on methane emissions from California and he explained in layman's terms that methane emissions have a lifecycle of 10-12 years. It is not actually going up into the atmosphere and it goes back into the grassland.

“So, what I am asking Teagasc to do is relook at the science here. If we can prove that we can do this in Ireland, then maybe it is something that could be rolled out across Europe.”

In line with this, Mr Cullinan said the IFA will be pushing for a €300 payment for suckler cows and €30 for ewes.

“It is time we push back and I think we have a massive story to tell. We have to convince our government that by keeping the suckler cow and sheep in disadvantaged areas, they are maintaining grasslands.

“We need a decent payment, we need €300 for the suckler cow. We need €30 for ewes. We need to go back to proper environmental payment schemes, similar to the old Reps schemes.

Continuing, he stated: “Our government is going to spend anything up to €5bn over the next couple of years paying fines or buying carbon credits. Instead of spending that money, which will do nothing for the economy, why not give it to farmers to protect the local areas and keep people living in rural Ireland. That’s what we need to do.”

The Tipperary man then touched upon issues with beef pricing, before reaffirming his commitment to pushing for an EU ban on below cost selling.

He stated: “Below cost selling is something that affects all sectors in farming, dairy, beef, lamb, pork, fresh vegetables.

“It is something I feel very strongly on and have done a lot of work on in the past. The only way we will deal with below cost selling, is if we get legislation.”

Although noting it would be ‘very difficult’ to get legislation introduced by government, Tim remained optimistic something could be done at an EU level.

He stated: “This needs to happen on an European level. We export 90% of our beef. Just getting legislation in Ireland is not going to resolve that issue.

“So, what I intend to do is align myself with like minded countries in Europe and see can we drive through the political system in Europe and try get a ban on below cost selling,” he added.

In conclusion, the IFA President vowed to represent farmers from Longford and throughout the country to the best of his ability, noting his door is always open.

“I want to represent all farmers and I think by working together we will achieve a lot more.

“I am reaching out to all farmers. I think I will provide the leadership needed, I have done it in the past and I will do it again,” he concluded.

Also read: Emission science has moved on and so must the rules - IFA