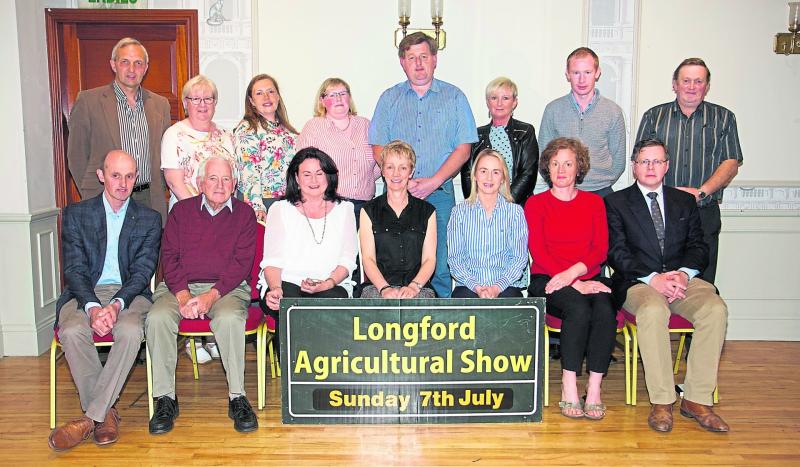 The Longford agricultural show and country fair committee pictured at the recent launch of this year's event, the 117th instalment, at the Longford Arms Hotel on June 11

One of Ireland’s longest lasting agricultural shows, the Longford show and country fair, is set to make its way to Lisnamuck on Sunday, July 7, for the 117th annual instalment.

Taking place on the farm of the Plunkett family, Eircode - N39YK29, this year’s event promises to be bigger and better than ever before.

The Longford Agricultural Show and Country Fair was first founded in 1902 and has long been a day out for Ireland's rural dwellers. The aim of this year’s show is to bring urban and rural dwellers together, in a beautiful rural setting.

The launch for this year’s event took place on Tuesday, June 11, at the Longford Arms Hotel. With a packed crowd in attendance, organisers promised that this years instalment will be the best one yet.
Featured at this year’s show will be the usual abundance of animals, including Michelle Shaughnessy and her famed Highland cattle, pigs, Alpacas, ferrets, donkeys, horses, sheep and even more cattle!

There will also be a wide selection of competitive classes in horses, ponies, cattle, sheep, goats, crafts and farm produce.

One new animal-related event is the side-saddle competition, with judging to be conducted by one of Ireland’s leading side-saddle riders, Marie McDonagh.

Committee member Helen Dolan explained to the Leader, “There is a new side-saddle competition this year, which we have never had before.

“We have Marie McDonagh, the top side saddle rider in Ireland, coming over to judge.

“She has made quite the name for herself and she even races side saddle. This year she is going to judge it rather than compete.” She continued.

Along with animals of all kinds, there will also be a huge crafts section at this year’s show and country fair, with plenty to learn in Lisnamuck.

The show will also boast an array of trade stands, with crafters, home bakers, fruits and vegetables, jewellery, make up, flower arranging, and more.

“The craft section is huge this year and the trade stands.” Helen Dolan told the Leader.

“I didn’t think it was going to be such a big show, but it has been full throttle.

“It has been amazing, we have had great support.” she added.

People of all ages can learn all about glass engraving, basket weaving and flower arranging at this year’s show, while there will also be a wood carver on hand over the course of the day, sculpting for all to see.

“We are going to also have a basket weaver and all day long he is going to teach people how to make baskets.” Helen explained.

“We also have people coming from Newtownforbes to teach karate lessons and we have one of the top flower arrangers in the country coming too,”

Fiona Egan will also host cookery demonstrations on the day in the crafts section at 12pm, 2pm and 3:30pm.

For those with a musical ear, the Gig Rig is where all of the action will take place from 12pm, with performances from many local talents such as Seamus Farrell, country music star Stuart Moyles and Celtic Blondes Irish dancers.

Children’s entertainment on the day includes pottery making, colouring competitions, a treasure hunt, and an array of other fun activities & games. There will also be appearances from superheroes such as Superman, Batman and Spiderman, meaning it will be all action in Lisnamuck!

So why not take a trip down to Lisnamuck, Co Longford, it promises to be a 'fair' day for all involved.