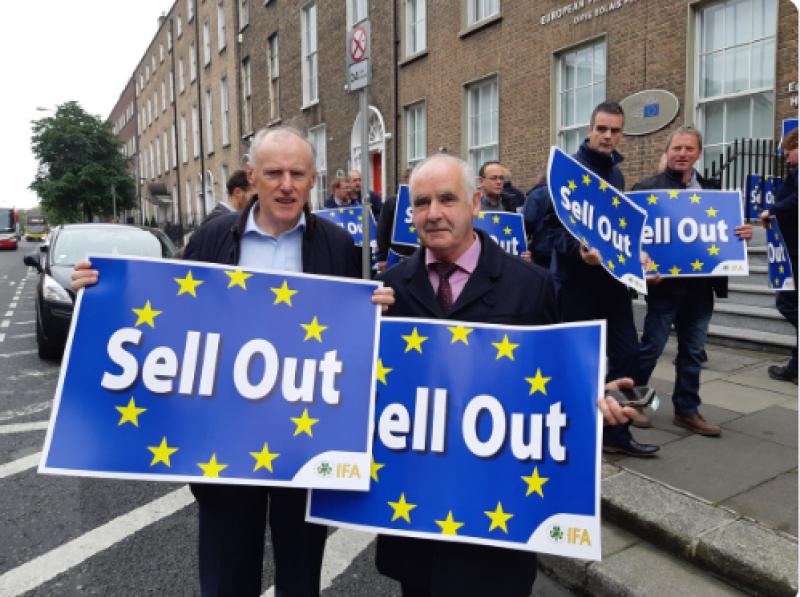 Members of the Irish Farmer's Association (IFA) gathered outside EU commission offices in Dublin on June 24, in protest of the proposed Mercosur deal, which the IFA say is 'selling out' farmers.

Gerry Kiely, head of EP in Ireland, was confronted by National Livestock chair of the IFA, Angus Woods and President Joe Healy, but could not make any promises over the proposed trade deal.

.@woods_angus & @joehealyfarmer confront Gerry Kiely, Head of the @EPinIreland on its plans to #sellout Irish farmers in #Mercosur deal pic.twitter.com/kRjIRaYEpp

IFA President Joe Healy led IFA National Officers and members of the IFA Livestock Committee in the protest and said it conveyed a very strong message to the Head of the European Commission in Ireland Gerry Kiely.

“The Commission has no credibility if they want to pursue a trade deal with a Mercosur group that has no regard for standards, the environment and labour laws. This flies in the face of the EU’s own climate policy.” He said this is utter hypocrisy.

“The Commission’s Food and Veterinary Office has repeatedly found that the Brazilian authorities, in particular, fail to meet EU standards on animal welfare, traceability, food safety and the environment,” he said.

“The EU Commissioner for Agriculture Phil Hogan has to stand up for Irish and European farmers and not allow EU negotiators to show such a blatant disregard for EU standards. Minister Hogan cannot allow the EU do a sell out on the beef sector to Brazil.” he said.