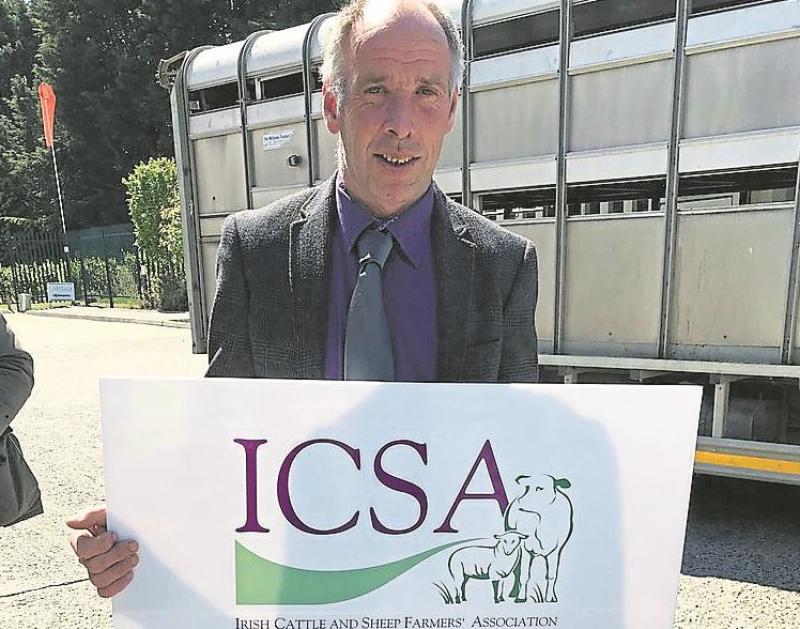 Sean McNamara, the recently elected sheep chair of the Irish Cattle and Sheep Farmers’ Association (ICSA), has issued a warning to factories to increase prices poste-haste.

Sean, who hails from Lismacaffrey on the Westmeath/Longford border where he runs his own flock, says the recent price fluctuations have caused a huge strain on farmers.

He told the Leader, “At the moment, prices are at about €5.50/kg, last year they were about €7/kg for lambs. That’s about€30 per head in the difference.

Sean, who previously served as vice chair of the ICSA sheep committee for a two-year period before taking on the main role, held a meeting recently with representatives of Irish Country Meats, Camolin, Wexford, the site of a recent protest organised by the ICSA on declining prices.

Describing the meeting as ‘a very robust discussion’, Mr McNamara says they warned the factory of the consequences of further price cuts.

“We had a meeting, we didn’t get all that we want, but we warned them that if they go with the same price cuts they implemented before, we will be back protesting again.” he told the Leader.

“They didn’t like to hear us saying that, but that’s the way it is. I have a lot of farmers backing me and all I have to do is make a phone call and I can get three bus loads of people out if I need them,” he warned.
Sean says many farmers are now left considering their futures in sheep farming.

“Farmers are now considering their options. I told the factory that if they keep making price cuts, they won’t have any sheep farmers left.

“Farmers are not going to continue working for nothing, they have to make a living. Everyone else seems to make a living, from the factory to the chef that cooks the lamb, but the farmer is getting nothing,”

Sean then pointed to the huge mark-ups earned by factories and retailers off product produced by them.

“Retailers are buying Irish produce, but they are taking a huge mark-up on it. We at the very least should get a fair share of the profit of the lamb.

“But we are not, retailers and factories are making a good percentage off our lambs and the farmers get nothing,” said the ICSA sheep chair.

“We don’t want any handouts or anything, we just want a fair price and that’s it,” he added.

Sean says a fair price constitutes €110-€115 for mid season lambs and €125 for early lambs, while he also confirmed that the issue surrounding EID tag reading systems, or a lack of, was also discussed during the meeting at Camolin.

“They tell us they will have the systems in place by June 1, but I don’t believe they will.

“We are being pushed into this since last October, at an extra cost to farmers,” he stressed.

The Sheep chairman of the ICSA then issued one final call to Minister for Agriculture, Food and the Marine, Michael Creed TD, to postpone EID systems.

“We want the thing postponed for at least 3-4 weeks until marts and factories have EID tag reading systems in place.

“If they are not prepared to do it, get rid of it altogether. Why should we use EID tags if nobody else complies with the rules?”