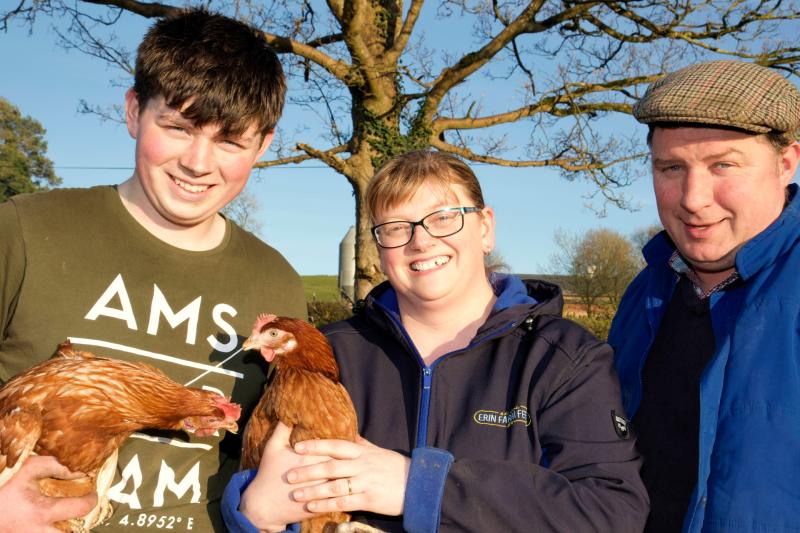 Shirley and Derek O’Halleran are a husband and wife partnership behind O’Halleran’s family farm, a free range egg production in the heart of Kenagh, Co Longford.

Shirley herself hails from Kenagh, while Derek is an Offaly man who had previously kept hens as a youngster. A true family-run operation, they are also helped out by their two children, Keith and Rebecca, one full-time employee and three other part-time staff, all living in the locality.

“Our daughter Rebecca is in college, but when she is at home she helps us on the farm. Keith is in 5th year in Mercy Ballymahon and he would much prefer to be out all of the time on the farm,” Shirley told the Leader.

Also read: Longford Tidy Towns: Nobody can do everything but everybody can do something

Their journey into the life of egg production began twenty one years ago in 1998, as the couple tried to figure out the best way to make the most of land available to them. Together they decided that working with hens was ‘eggactly’ what they needed, although Shirley had no prior experience working with poultry.

“Derek had hens as a child, but I never knew anything about hens,” Shirley noted.

“We were both working away from home and we were looking for some kind of an enterprise that would enable us to eventually both be home all of the time.

“We knew it would have to be fairly intensive as we didn’t have a huge amount of land. We were looking around and we eventually decided upon free-range hens.”

After originally developing a 3,000 hen production unit, the family have expanded their base and now run three production units, which can house up to 16,500 hens.

The farmers developed their own packaging unit in 2007 and became registered with the Department of Agriculture, meaning they can now package and sell their own supplies. They now supply eggs to Supervalu and other stores throughout Longford, as well as Longford farmer’s market and in neighbouring counties.

“We started when the Farmer’s market opened fifteen years ago and we have never really missed a market since.

“We would love to be able to sell all of our eggs under our own brand name at some stage.

“We enjoy what we are doing. We were both born and raised on farms and it’s a good life,”Shirley concluded.