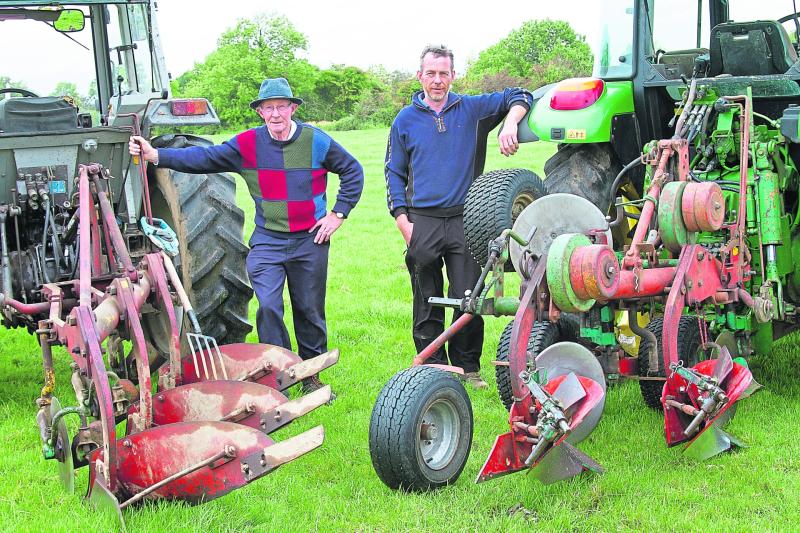 Edgeworthstown ploughmen Anthony Reynolds and his father Tom with their tractors.

This week the National Ploughing Championships kick off in Screggan, Co Offaly and the Longford contingent will be out in force over the course of the three day event.

Anthony Reynolds from Edgeworthstown is not only ploughing in the All-Ireland event this year but is also participating in ‘The 2018 Five Nations Ploughing Challenge’ taking place in conjunction with Northern Ireland's premiere ploughing event so as Luke Casey PRO Longford Ploughing Association (LPA) told the Leader, “It's full throttle for the month of September”.

ALSO READ: Opening of National Ploughing Championships in Screggan postponed until 11am tomorrow due to Storm Ali

He went on to say that the Republic of Ireland Ploughing Team participating in the 2018 Five Nations Challenge included Mr Reynolds who is competing in the Conventional Class, and Karl Davis of Laois who will compete in the Reversible Class.

“Both men have won their respective classes at the 2017 National Ploughing and this is Anthony’s first time to carry the flag for Ireland,” Mr Casey continued.

“Ploughing competitively for over thirty years now, under the stewardship of his father Tom, Anthony's ploughing has won many accolades.

“He won the U21 All Ireland in Enniscorthy in 1994 and in  2012 was Intermediate Champion at New Ross in Wexford.  Last year he qualified for our International team and it is a remarkable achievement for a Longford native.

Mr Casey added, “Many of the keen ploughing competitors are form arable counties.  The pastures of Co Longford are not known for arable farming and yet despite this disadvantage, Anthony competes comfortably with the best anywhere in Ireland . When asked to pick his most rewarding accomplishment with his plough Anthony replied, ‘it's always nice to win at the local county match in Longford’.”

Meanwhile, always keen to work at his ploughing, Anthony will plough at two competitive matches in Offaly on  Saturday 15 and Sunday 16;  he will also be in action again on Wednesday, September 19 at the National Ploughing Championships.

“Fingers crossed that he will qualify on Wednesday for Thursday’s ‘Test Match’ where Ireland's international team for next year is selected,” added Mr Casey.

“This roll of competitions starting in mid September will sharpen Anthony’s wits and prepare him for the bigger stakes.  For more details follow Longford Ploughing on Facebook.