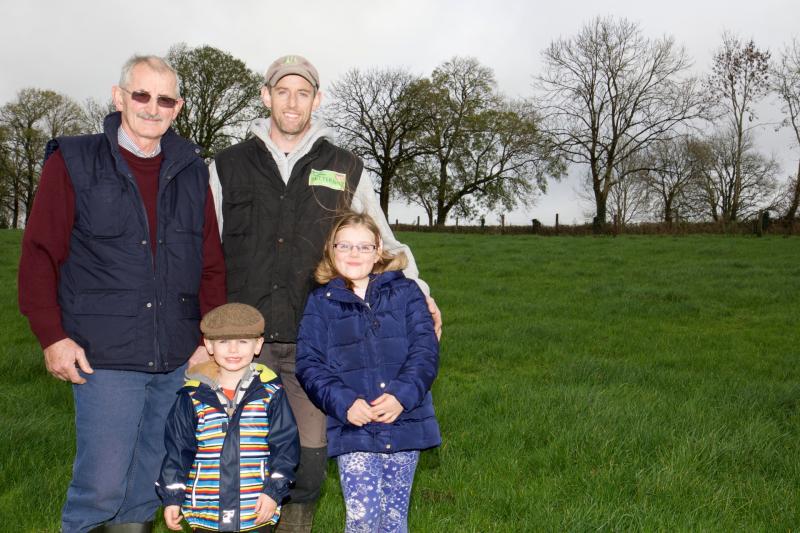 'Grass10', which the awards are based on, is a four year campaign to promote sustainable grassland excellence for Irish livestock.
It aims to increase grass utilisation on Irish livestock farms and its objective is to increase the number of grazings per paddock to 10 and the amount of grass utilised to 10 tonnes grass dm/ha.
Meanwhile, the Beirne’s run a beef farm where they have adopted a dairy model into proceedings.
And, while there has been a “bit of tweaking” to this model over the years, the local farmers’ say things are going well now.
They farm 85/ha comprising the main farm alongside three out-farms.
The holding furthest away is just 15km.
The Beirnes have been operating a paddock system for the past five years and during that time have been in a position to extend to 87 paddocks.
“Over that five years we have also extended the measuring of the grass,” said Dessie speaking to the Leader.
The Beirnes use the PastureBase Ireland online Teagasc service and this allows then to budget for grass growth which Dessie says can change weekly depending on a number of factors including fertiliser and weather.
“As you increase your stock, the demand for grass increases, so with a measurement system in place we can extend the grazing season by 250 days,” Dessie continued, before pointing out that none of this would ultimately be possible without leading in slowly at the beginning of the year and leading out slowly at the end of the year.
“This year we started closing paddocks from October 1 - some of the livestock is still out.”
Meanwhile, Grass10 incorporates the roll-out and promotion of the re-launched PastureBase Ireland online grassland database.
Livestock farmers can use this platform to record their grass covers, and easily monitor their performance in relation to the Grass10 targets of a number of rotations and grass utilised.
As part of the awards, farmers were expected to have 10 grazings in the grazing season and utilise 10 tonne dm/ha.
“Utilisation on the farm here is between 75% and 85% and we have been hitting all the targets so that is why we entered the competition,” Dessie said.
With regards to the awards which focus on all areas including beef, sheep and dairy, competitors have now been whittled down to 14 including the Beirnes.
Frank and Dessie have also been part of the Phase 2 Better Farm project which was run in conjunction with the Irish Farmers Journal.
Dessie also established a local Grass Group with Shane Devaney. Members meet monthly and chat about the best ways to work the farm.
One farmer even travels all the way from Galway for this meeting!