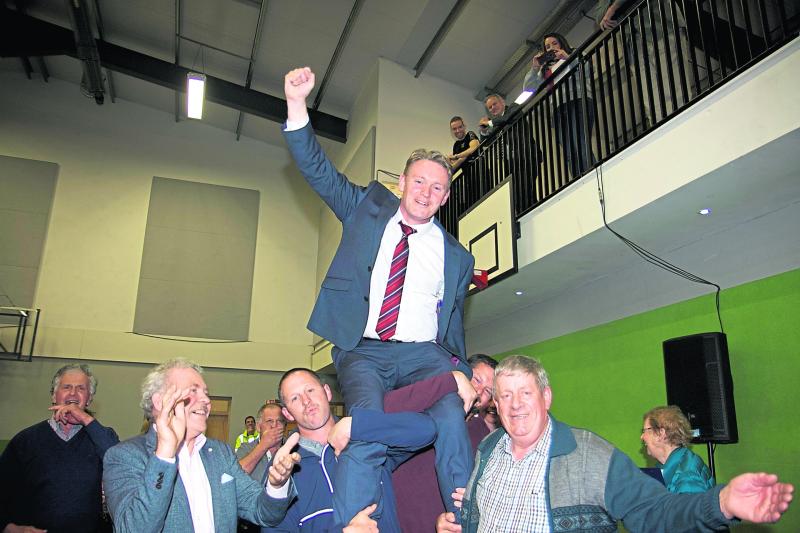 Fine Gael’s Micheal Carrigy says he will have “no fears” in standing before the electorate again after Taoiseach Leo Varadkar opened the door to a possible general election before the end of the year.

Cllr Carrigy was speaking in the wake of successfully retaining his Granard electoral area seat at the weekend as Fine Gael strengthened its position as the predominant party in Co Longford. The Ballinalee postmaster expressed his delight at joining Independent Turlough ‘Pott’ McGovern as one of the area’s five local representatives on the first count on what was a weekend to savour for the main government party.

“I’ve worked hard for people over the past five years for the people of the Granard District and I am delighted they have put their confidence in me for another five year term,” he told the Leader.

Cllr Carrigy said he and other party strategists had set their sights on wrestling control of the council from Fianna Fáil in the days and weeks leading up to last week’s election, a target which could not have been more impressively delivered.

“We set out a priority in the Granard District as a party that we would try and elect three of the five candidates,” he said.

“That was our strategy and there were areas that I didn’t canvass, the likes of Drumlish, Dromard, Ballinamuck and lower Aughnacliffe and to maximise the Fine Gael vote in the other areas.

“I am delighted that both Paraic (Brady) and Garry (Murtagh) had strong results in delivering three seats with 46.3 per cent which is the highest in the country.”

Granard apart, Cllr Carrigy said the party’s overall performance across the county could not have been more gratifying.

“We’ve worked hard for the people of Longford over the last five years and we have been successful in getting a lot of investment into the county from government and that’s why we got the results we have.”

Cllr Carrigy was coy when asked about where talks over the state of the Council’s balance of power lay, preferring instead to imply further deliberations were planned with Independent candidates over the coming days. The Fine Gael group leader, however, did confirm he would have little angst in putting his political credentials on the line once more should Taoiseach Leo Varadkar call a snap general election.

“I would have no fears,” he said confidently.

“I will go on my track record. I’ve worked not just in the council for the past ten years but in community based activity for over 25 years.

“Over the past two years since I have been identified as a candidate we have had significant financial investment into the county.

“If you look at Micheal Ring’s (Local Community and Rural Affairs) Department, over €12m (has come on stream), there has been major urban and regeneration funding which has come through this year, we have had significant investment in St Joseph’s Hospital, there’s been the provision of a gas line and the agreement on the N4 extension.

“That’s significant investment and I would have no fear in going to the electorate on the back of that and to make sure that Longford continues to prosper which it didn’t for a long number of years.”