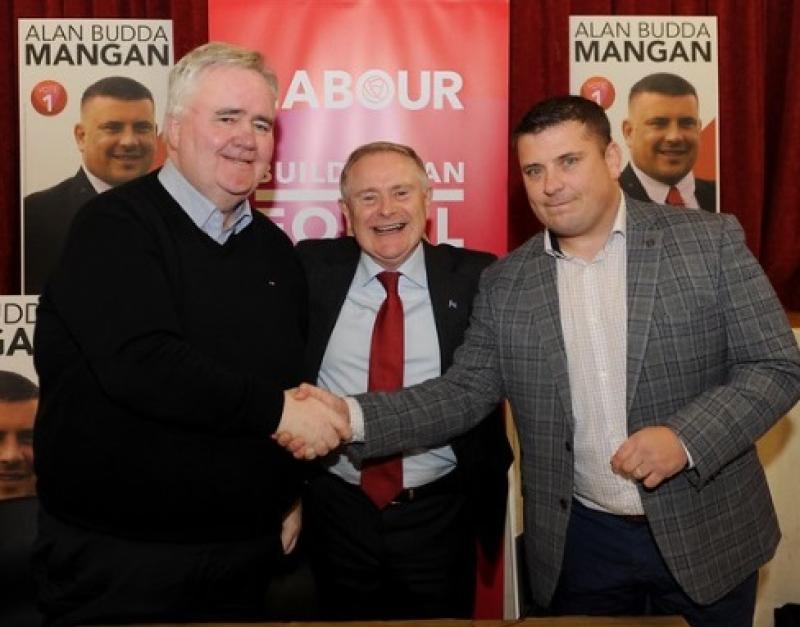 At the launch was Willie Penrose, outgoing TD for the area and Labour leader Brendan Howlin.

Speaking on the night, Mr Mangan outlined his key priorities if elected: “As a frontline HSE worker in addiction services, I’m acutely aware of the pressure our hospitals are under. Every day I experience the strain on our health service so I know all too well how badly proper investment is needed.

“Other main areas I aim to focus on are housing, support for local businesses and job creation. I waited five years for mortgage approval to buy a house with my wife and family so I’m very familiar with the difficulties facing young, hard-working people today.

"I would also like to pay tribute to Deputy Penrose for his devoted service to the constituency over the years. The high regard in which people hold Willie is a true testament to the commitment he’s shown Longford/Westmeath throughout many decades in public office. He dedicated his career to helping others, always in it for the right reasons and never for personal gain. I’m well aware of the big boots I have to fill but look forward to continuing Willie’s legacy in the Dáil, if given the chance." he continued.

SEE HERE: For full coverage ahead of GE2020

Continuing, Mr Mangan pledged to fight for an equal society.

He stated: “Throughout my time in GAA I’ve made the village proud wearing red and black and I’ve made Westmeath proud wearing maroon. I always enter a race to win and now I hope to put on the red jersey for Labour and make this constituency proud by fighting to achieve the equal society we deserve,"

“We have policies on housing, healthcare, work, childcare and climate action that are absolutely non-negotiable.

“Labour wants to build 80,000 houses on public land, make healthcare free for all at the point of need and ensure a fair start for every child. Securing better working conditions and ensuring a just transition to a greener economy are also core areas for us,” he said.

Deputy Brendan Howlin echoed these priorities and commended Alan’s efforts and dedication to the campaign so far: “Labour stands for equality and in order to achieve that, we must end the waste of public money, build houses and fix health.

“It’s already very clear from the overwhelming support shown here this evening that ‘the Budda’ is more than capable of carrying the Labour torch in Longford/Westmeath and will work hard to go above and beyond to deliver what’s needed,” he concluded.