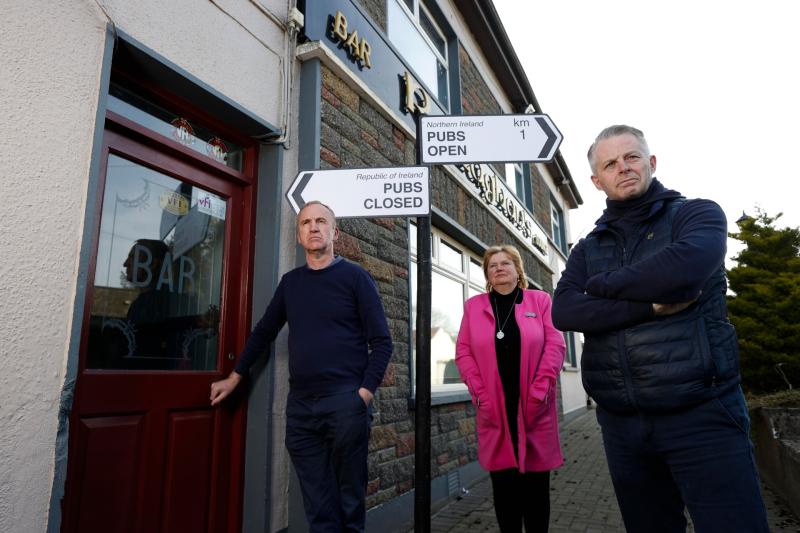 The vast majority of publicans want to be allowed to reopen like in Northern Ireland where all hospitality outlets will open together this week without any division between food and non-food pubs or the requirement for a substantial meal.

That’s one of the main findings in a new survey that has just been published.

The Vintners’ Federation of Ireland (VFI) says the upcoming Government announcement about reopening hospitality must include a coherent plan that provides confidence for its members and the 50,000 staff employed by pubs.

This coming Friday (April 30) pubs in Northern Ireland will reopen for outdoor trading then three weeks later they can resume indoor business.

A similar scenario in the Republic would see outdoor reopening resume on May 28 and indoors on June 18 (assuming a four-week lag in ROI vaccinations compared to the North).

While the Northern Ireland reopening strategy is viewed as the best way forward there is huge concern amongst publicans, particularly in border areas, that customers will flock north when beer gardens open this week while currently there is no date for opening pubs in the Republic.

The survey findings are published as the Government prepares to reveal its reopening plan for the hospitality sector this coming Thursday.

Padraig Cribben, VFI Chief Executive, said: “The survey of VFI members reveals an overwhelming demand for the Government to follow the Northern Ireland reopening strategy. Given the North is planning to fully reopen its pubs and hospitality sector in May it would be crazy to have two different systems in place on the island.

“Similar to the reopening plan in England, the North has abolished the much-derided €9 meal and all hospitality outlets will reopen together. Even Simon Harris, who was Minister for Health when the substantial meal provision was introduced, has called for it to be abolished and for traditional pubs to reopen alongside food outlets.

“The clear message from the survey is that publicans want to be treated equally with their hotel and restaurant colleagues. Government cannot split the sector like they did last year when traditional pubs were forced to remain closed while food outlets reopened,” he declared.

And he added: “Our members are worried by media reports referring to ‘outside dining’ and reopening dates for hotels and B&Bs without any mention of pubs. Our message is clear, the hospitality sector must reopen together.

“This week will highlight the peril facing the pub sector as outlets in the North will reopen beer gardens. There is genuine concern customers will flock north while our members have to sit back and remain closed. The imminent Government announcement must provide a coherent strategy for pubs through indicative dates for both outdoor and indoor trading. The trade is desperate for a plan that injects confidence into the sector.

“Reopening pubs is not something that can happen overnight. Our members need indicative dates to allow them to plan, rehire staff and get their pubs ready. Suppliers will need time to ramp up brewing and organise deliveries,” said Mr Cribben.

Pictured close to the border in Clontibret were Vintners’ Federation of Ireland (VFI) members Brian Renaghan, owner of Renaghan’s Bar in Clontibret, Diane Kendrick, owner of The Coach House and Olde Pub in Glaslough, Co Monaghan and Ray Aughey, owner of The Squealing Pig in Monaghan Town. As pubs in Northern Ireland are set to reopen outdoors this week, publicans in border counties are extremely concerned their customers will flock North to socialise while they wait for the Government to announce its strategy for reopening hospitality. The Vintners’ Federation of Ireland (VFI) says all hospitality outlets must reopen together while warning that implementing a different reopening strategy to Northern Ireland would cause huge damage to the trade. Picture Conor McCabe Photography