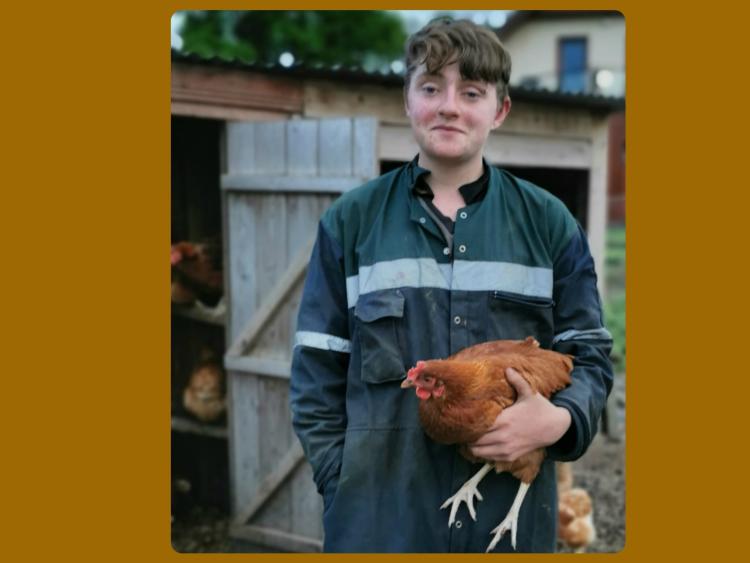 Despite the lockdown, the past few weeks have been a busy time for Ardscoil Phádraig, Granard Transition Year Student Shane Gettings.

Shane, a native of Lisryan, has progressed to the National Final of the NFTE Programme.

It is managed and provided by Foróige in Ireland and is affiliated to NFTE International.

Shane’s business idea began back in 2015 when he set up ‘Gettin’ Eggs’. When he first started out, he had just 15 hens, with his flock growing to 95 at present.

Each morning he collects the eggs, going on to clean and package them to sell to his many customers. He has managed to sell his eggs through two of his local shops and he also hand delivers in the local area.

Shane has also reared turkeys to sell for the past few years at Christmas time.

For the competition, Shane had to draw up an extensive business plan outlining the background of his business, the challenges he faces, along with his hopes for the future.

The judges at the regional final, held ‘virtually’ back in March were so impressed with his business expertise that he progressed to the next stage to the semi-final.

Again, the judges were blown away by his enthusiasm saying, “It is clear that Shane is very passionate about his business and really enjoys what he is doing.”

They were also very impressed with Shane’s determination to stick with the business after setting it up from a young age.

Ardscoil Phádraig teacher Caroline Kelly explained that involvement in the NFTE programme has been shown to improve the business, academic and life skills of young people. She added, “We have no doubt that Shane will benefit hugely from his involvement in this programme.”

Shane would like to thank all of his loyal customers for their custom since he began the business. He would like to remind people that he delivers eggs in the local area and can be contacted on 087 1021597.

The staff and students of Ardscoil Phádraig would like to wish Shane the very best of luck in the national final which takes place this Wednesday, May 27 with the winner going on to represent Ireland at European National Awards in Vienna in November.

There'll be days like this: Ballymahon music teacher sends out a wellbeing message to students