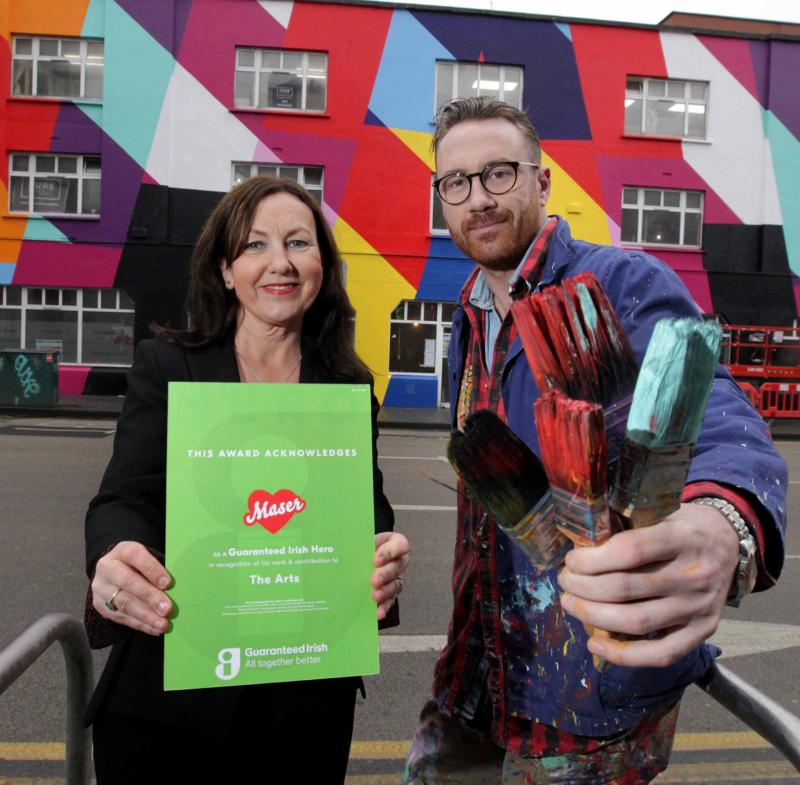 CEO of Guaranteed Irish, Brid O’Connell, and artist Maser, who received the first of six ‘Hero’ award for his contributions to contemporary art. Pic: Mark Stedman

Business membership organisation, Guaranteed Irish is issuing the final call for individuals and businesses in Longford to get involved in their Guaranteed Irish ‘Hero’ Awards which recognises the work of people who have been ambassadors for Ireland both at home and abroad.

People are invited to nominate their heroes in the areas of sport, science, music, technology and food through the Guaranteed Irish website or by using  #GIhero on Twitter.

Commenting on the Heroes campaign, CEO of Guaranteed Irish, Brid O'Connell said: “Throughout 2017 we will be championing six exceptional individuals who have demonstrated a commitment to creating a better Ireland through: jobs, community and provenance, across six categories: art, sport, science, music, technology and food. It is through their innovations and sheer hard work that they have boosted Ireland's reputation, both nationally and internationally, and here at Guaranteed Irish, we want to recognise that."

"These awards are a great opportunity to commend someone who you consider to be a Guaranteed Irish Hero." continued Brid O'Connell "We're calling on businesses and individuals in Longford to get involved and put forward names of anyone who has demonstrated a real commitment to creating a better Ireland through: jobs, community and provenance across: sport, science, music, technology and food."

The next Guaranteed Irish Hero will be awarded in March for their contributions to sport, with the remaining Heroes to be announced every two months following: science in May, music in July, technology in September and food in November.

To get involved and to nominate your Guaranteed Irish Hero, simply email info@guaranteedirish.ie  with your nomination or you can nominate and follow the campaign across social media with the dedicated hashtag: #GIhero.