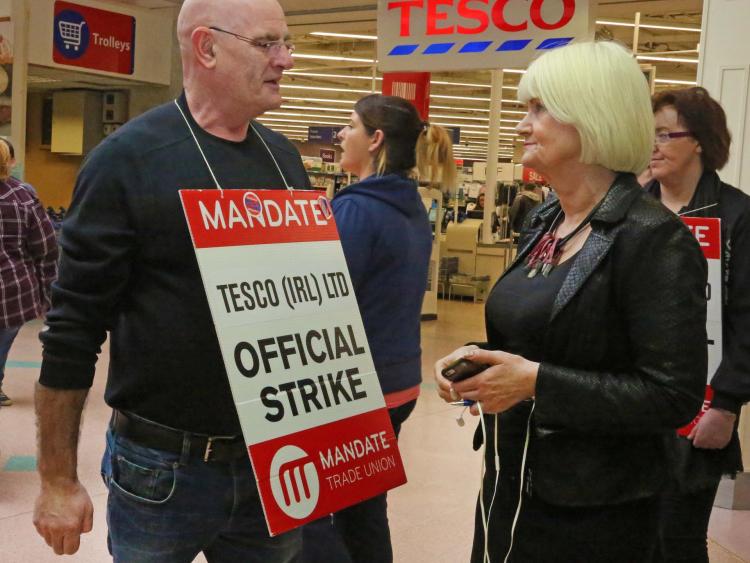 Workers in Tesco and throughout the retail sector deserved a decent job which allowed them to rear a family, put food on the table and fund a mortgage.

This was the view of Marian Harkin MEP following a meeting on the picket line with Tesco workers in Longford.

She emphasised that the current Tesco dispute was not just about 250 workers with pre 1996 contracts but the understandable fear of thousands of workers who were concerned that this was the first step in unilaterally changing the Terms & Conditions of all workers.

“As a member of the employment Committee of the European Parliament I receive regular information on employment numbers in the EU and the nature of that employment”, she said. Increasingly these figures revealed that permanent positions were being replaced with temporary ones and in the case of Tesco in Ireland the 900 workers who took redundancy had been replaced largely by workers who were not on full time contracts, she stated.

“This is no basis for building a secure future and I fully understand why workers fear that progressively Tesco may dilute the terms of employment of its entire 14,500 workforce”, she said.  According to newspaper reports there was little between Tesco and the workers to resolve but on the picket line this did not appear to be the case, she said.

“The striking workers are being supported by fellow workers on the basis that they believe they are being offered a loss, on all counts, deal while Tesco believe the opposite”, she said.  The state dispute resolution agencies had, to date, failed to obtain agreement between Tesco and the workers representatives, she added.

“This dispute affects workers, their families, and whole communities and needs to be quickly resolved and I recommend strongly the appointment of an agreed arbitrator to identify a way forward which could also create a template for the future for the entire retail sector”, Marian Harkin proposed.