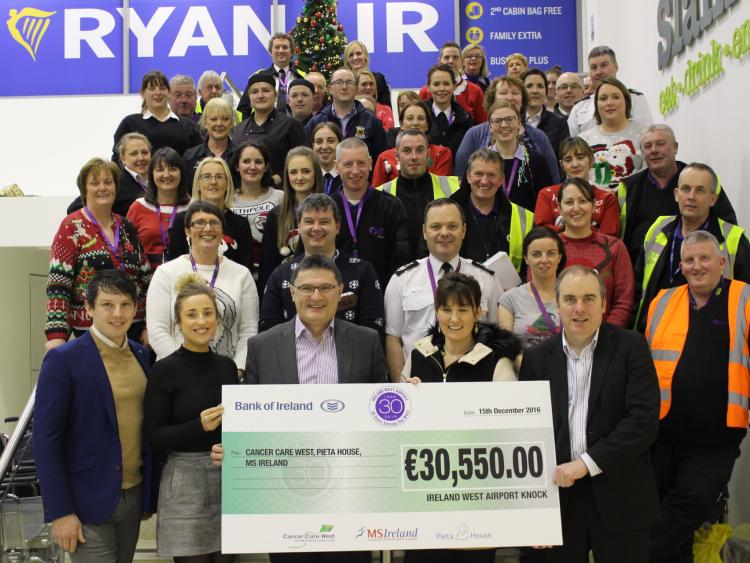 Over the course of 2016 events took place with Ireland West Airport employees getting involved to support the three charities.

In addition the airport hosted a gala night attended by 500 guests, to mark the 30th anniversary of the official opening of the airport. Both events generated significant funds all of which went towards the fundraising efforts for the three charities.

Speaking at the cheque presentation, Joe Gilmore, Managing Director, Ireland West Airport, said, "2016 has been a memorable year at the airport as we celebrated the 30th anniversary of the official opening of the airport. This year was the first year of our charities of the year initiative and we are delighted to be presenting a cheque to the three charities for over €30,000 which will support the fantastic work been done by these charity organisations.

"The fantastic work that these charities all undertake really does make such a difference to the people that they support in our community. This new initiative is part of the on-going support and social responsibility activities that help the airport build bridges with the local community and we look forward to a successful year of fundraising with three new charities in 2017."

Mike Crowe, Fundraising Manager, MS Ireland, said, "MS Ireland were delighted and privileged to have been selected as one of the Charities for 2016 at Ireland West Airport. Throughout the year, the staff raised more than €10,000 for MS Ireland of which we are very appreciative as are the people who rely on our services. On behalf of MS Ireland, I would like to sincerely thank all the staff at the airport and assure all the employees that every cent they have raised will be used wisely and prudently."

Richard Flaherty, Chief Executive Officer, Cancer Care West, said, "I would like to sincerely thank Ireland West Airport and all of its staff members for their dedication, generosity and wonderful fundraising efforts on behalf of Cancer Care West this year. The funds you have raised will support many Cancer patients throughout the West of Ireland."

Brian Higgins, Chief Executive Officer, Pieta House, said, "We are so incredibly grateful to Ireland West Airport for their immense support and their fundraising efforts over the course of the past year. Because of this kind of commendable support, we at Pieta House are in a position to continue to offer our services for free to those who need them – those in suicidal crisis, those who self-harm and anyone who has been bereaved by suicide. We have always had a huge level of backing in the West and this is just another example of this at work. So thank you to everyone involved."