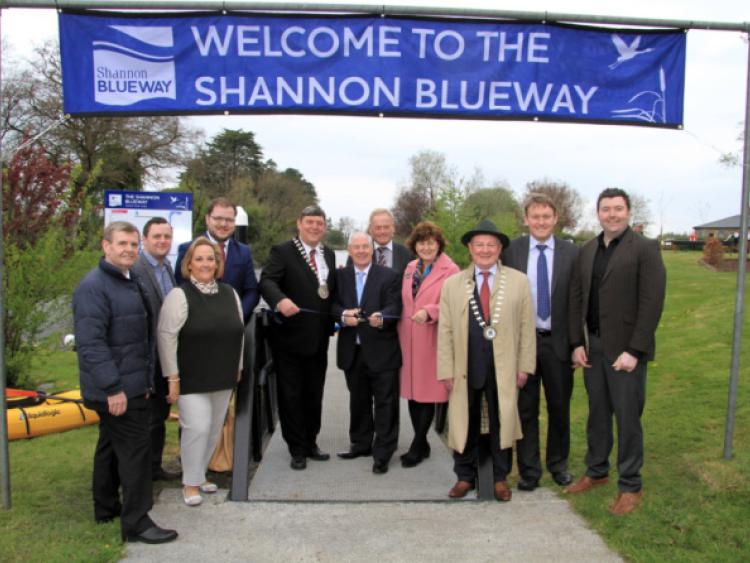 Tourism Minister Micheal Ring has challenged local politicians and the wider public to start “talking up” Longford’s potential as a tourist destination.

Tourism Minister Micheal Ring has challenged local politicians and the wider public to start “talking up” Longford’s potential as a tourist destination.

His comments came as he officially launched the Camlin River Loop and Longford Blueway Festival at a heavily thronged Richmond Harbour in Clondra last Friday.

The Mayo TD arrived into the harbour onboard a boat with Waterways Ireland CEO Dawn Livingstone.

And he didn’t take long in making his feelings known as to the opportunities that were open to Longford.

“If this facility was in any other part of the world people would be talking about it and saying it’s great to go there. We have it on our own doorstep, talk it up,” he fervently put it.

The Camlin Loop formed one half of the day’s ceremonial undertakings performed by Mr Ring.

Spanning 10km in total, the route has been designed to enhance the county’s water-based appeal, stretching from Richmond Harbour along the River Camlin to the River Shannon.

The other duty Mr Ring was tasked with concerned the launch of the inaugural Longford Blueway Festival.

He said the culmination of last Friday underlined just what can be achieved when various stakeholding agencies work in unison.

“Four years ago I was asked to launch the Longford Tourism Strategy from 2012-2015.”

At the time I was pointing out to that committee and everyone involved in that plan that there was only one way to go forward and that was everyone working together,” he said.

In a brief deviation from the vocal and passionate speech he delivered to audience members, Mr Ring raised more than a passing smile when referring to his Fine Gael colleague, James Bannon.

He said as soon as the merest sniff of capital funding crosses his ministerial desk, the Longford-Westmeath TD is nearly always the first one knocking at his door.

“Whether it’s sport or tourism, he thinks it all should go into Longford,” Mr Ring said jokingly, before addressing the Legan TD directly.

“Well James I cannot. I have to spread it around the country but I will do my best.”

He said the event added another string to Longford’s tourism bow.

The Fine Gael group leader also pressed Mr Ring for additonal funding to fully complete the Longford-Clondra walk by extending it to the Co Westmeath border.

The Independent Cllr went as far as to describe Co Longford’s Tourism Committee as the hardest working in the country, evidenced by the “exciting times” Longford people could now look forward to.

**Also see page 37 for photographic coverage of the Longford Blueway Festival family fun day which took place at Richmond Harbour, Clondra on Sunday afternoon and was a resounding success.