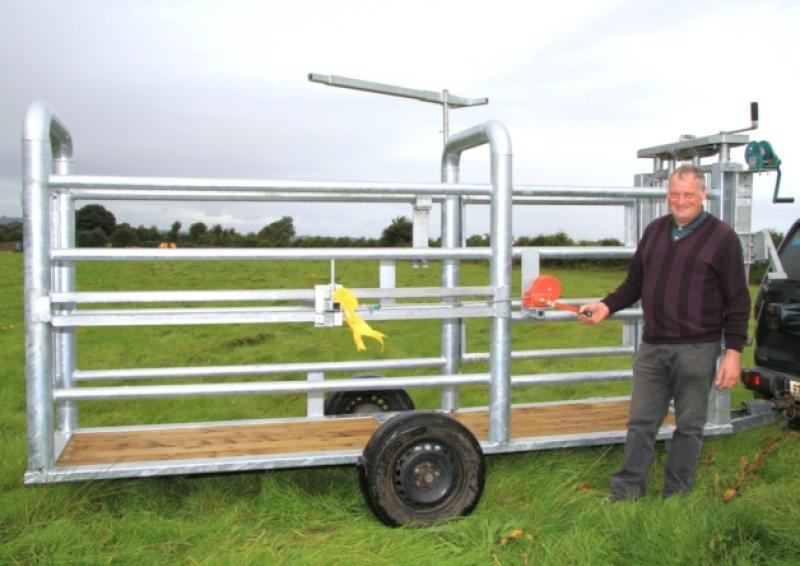 Another new farm invention that takes the hassle out of managing cattle has been launched by creative farmer Vincent Kiernan.

Another new farm invention that takes the hassle out of managing cattle has been launched by creative farmer Vincent Kiernan.

Mr Kiernan who hails from outside Granard has just brought his latest invention - the KO Mover, onto the market and it is a follow on from the KO Doser which came onto the market, with great success, last year.

The KO Mover is a unit that can be attached onto a cattle crush and enables cattle to move with ease through the crush. Mr Kiernan launched his latest product at the Tullamore Show where it was warmly received by farmers from across the country.

“First I had the KO Doser and now I have the KO Mover,” a proud Mr Kiernan told the Leader. “The KO Mover helps to move the cattle up along the crush. The idea came to me after a lot of farmers told me that having to push and shove cattle up a crush was something that was becoming more and more unsatisfactory for them.”

The unit not only enables ease of movement for the cattle but it also has an additional unit attached to it that can assist with Cesarean Section, if required. After launching the produce in Tullamore, he sold three units almost immediately and now believes there is a genuine demand for his product.

Mr Kiernan’s inventive streak only emerged after he sustained a hand injury while dosing cattle on his farm a couple of years ago.

“After that I felt that there must be a safer way to carry out the work and I came up with the KO Doser,” he added. “The doser is selling very well now and I got third prize at the Tullamore Show in the Agriculture, Horticulture and Forestry Section, for the KO Mover. Farmers couldn’t believe that something like this has come onto the market and there has been great interest in it.”

The Granard man has been farming his land in Coolarty all his life, and as he said himself, “I’ve seen all the pitfalls”. Having manufactured trailers for many year, the north Longford farmer decided to turn his creative hand to an entirely different project after business slowed down four years ago.