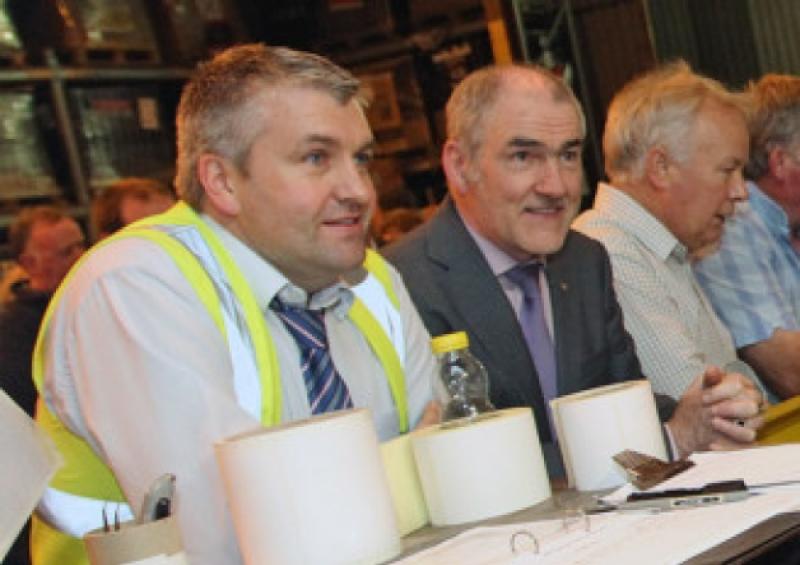 Tyrone football manager, Mickey Harte, who is also a motivational speaker, and Justin McCarthy, Editor of the Irish Farmers Journal addressed the crowd, while proceedings were followed by a deluxe BBQ that included a delicious spit roast pig - Kiernan’s fed of course - which was enjoyed by over 150 farmers, customers and staff.

Speaking to the Leader, Gareth Kiernan said that the event afforded the company an opportunity to showcase itself and pointed to its massive success in the animal feed industry.

“People don’t realise,” he said, “that Kiernan Milling is actually the largest mill in the country now.”

“The event last week allowed us to highlight that, and we had Justin McCarthy and Mickey Harte here to speak as well. We want people to come to Kiernan Milling and have it as part of their farm, not just as a place to buy feed.”

Mr Kiernan went on to say that both speakers impressed those in attendance. Mr McCarthy spoke about the beef situation, while Mr Harte addressed matters such as motivation and self care on the farm.

“Mickey Harte is regarded as a speaker who motivates and we felt it was important to have him here so that he could speak to farmers who are working away there on their farms, often on their own,” the plant manager continued. “The discussion overall was about life in general and our approach to life.”

The new Ruminant Coarse was the main focus of last week’s proceedings at the plant which is located just outside Granard on the Ballinalee Road. This new facility allows for the production of 90,000 tonnes at the plant putting it right up at the top of its niche in Ireland.

“The coarse was officially opened on the night and it is an innovative addition to Kiernan Milling,” Mr Kiernan continued. “We are able to produce 90,000 tonnes of feed that is mixed within a very short distance before it goes back on the lorry. We are now producing a high quality product that hasn’t been handled.”

In 2007 Kiernan Milling purchased Stewart’s Animal Feed and all processing now takes place in Granard, not Boyle. The plant has 30 years experience in problem solving within the Irish agricultural sector and is going from strength to strength since its inception by the late Buddy Kiernan in 1984.