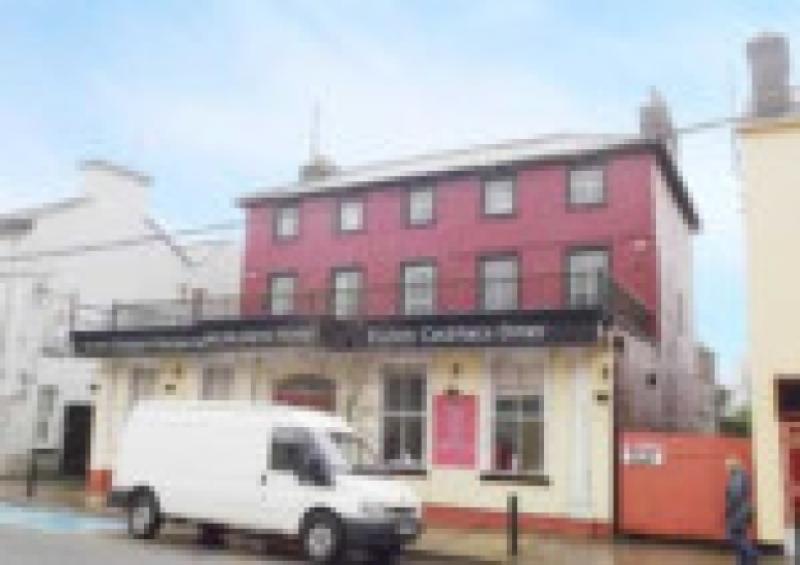 Hourican’s Hotel in Granard is one of over 190 properties set to go under the hammer at an Allsop Space auction sale on February 25 inside Dublin’s RDS.

Hourican’s Hotel in Granard is one of over 190 properties set to go under the hammer at an Allsop Space auction sale on February 25 inside Dublin’s RDS.

The famous building, situated along Granard Main Street and which has been vacant for over five years, boasts 18 bedrooms over 10,000 sq ft.

Sales agents for Allsop hope the building’s €90,000 reserve price and the addition of a two bedroom cottage will attract plenty of interest come auction day.

The Dublin based firm, which has become well-known for its regular ‘monster’ sales of residential properties in recent times, has also included a commercial site totalling almost seven acres in Longford town.

The site, on the southern side of the N62 opposite to Mastertech Business Park and adjoining Flancare Business Park, has planning permission for a retail development extending to over 5,000 square metres, together with a garden centre of around 800 square metres.

Allsop Space Director of Auctions, Robert Hoban said such has been the level of demand in similar auctions of its type, the group has decided to bring the start time forward.

“The number of properties is so big that we have decided to begin the auction at 9 am in order to get through the auction process in an efficient and timely manner.”

He said the wide array of lots up for sale and the likely exchange of units later this month will breathe new life into the economy.

“Apart from the new commercial opportunities this sale will also see many more Irish families find new homes and others bring new life to businesses throughout Ireland,” he said.

“Employment will inevitably follow and this will continue the process of rejuvenation of communities.”

In December, Allsop made €24m in sales, arising from the offloading of 140 properties, a feat which set a new record in the Irish domestic market.