Plenty of craic expected at the Ballymahon Music Festival 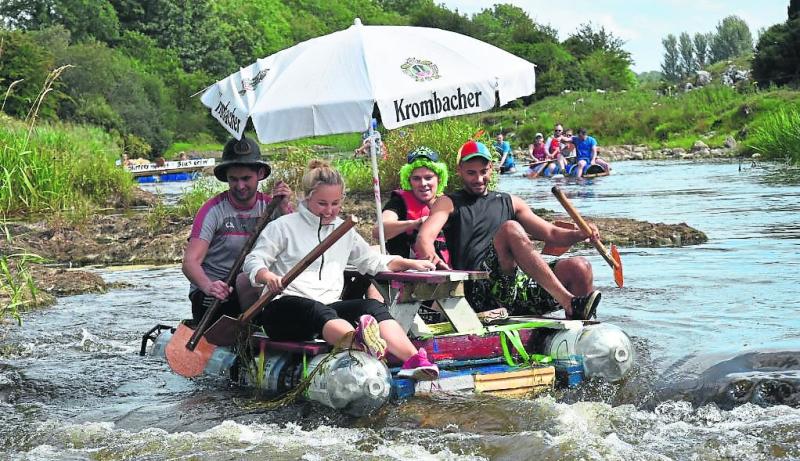 The very imaginative Skelly's Bar raft, which made its way down the River Inny for last year's race Picture: Sean Clancy

It's all kicking off in Ballymahon next weekend as the second annual Ballymahon Raft Race returns as part of the Ballymahon Music Festival on Saturday and Sunday, July 13 and 14.

The two-day event will hark back to the festivals of 20 years ago when live music would be played in the streets, but this festival will be a lot more family-orientated. And, while it's taking place on the tail end of the Longford Summer Festival in Longford town, organisers aren't worried about losing crowds, with plenty of locals looking forward to taking part in the fun-filled programme of events.

Also read - ‘For many rural dwellers in the area it’s their main social event’, Bernie Whyte

On Saturday, July 13, the Raft Race will kick off at 3pm, starting at Newcastle Bridge and finishing at Ballymahon Bridge.Registration is now open at €50 per raft - the price includes food for all four team members at a BBQ by the river afterwards - and there will be prize money this year, sponsored by Finn's Maxol Centra.

First place winners will receive a total of €400. There will be a prize of €100 for the best family raft, and another €100 for the quirkiest raft, so get building. There will be a gig rig set up outside the library where local bands will perform on Saturday evening and Mick Flavin will be the headline act, kicking off at 8pm.

On Sunday, Bridgeways Family Resource Centre will host a family fun day just behind the gig rig. There will be tug-o-war, a bar person's race with an obstacle course and plenty of other fun activities born of the crazy ideas in organiser Jenny White's head.

“It'll be good auld craic. It's very family-oriented and it'll make the most of what we have in Ballymahon,” she said.

To register for the raft race or for a full programme of events, see Ballymahon Music Festival on Facebook.

Also read: Longford show returns to the Plunkett farm for a third year