Ballymahon Raft Race to go ahead 'for the craic' 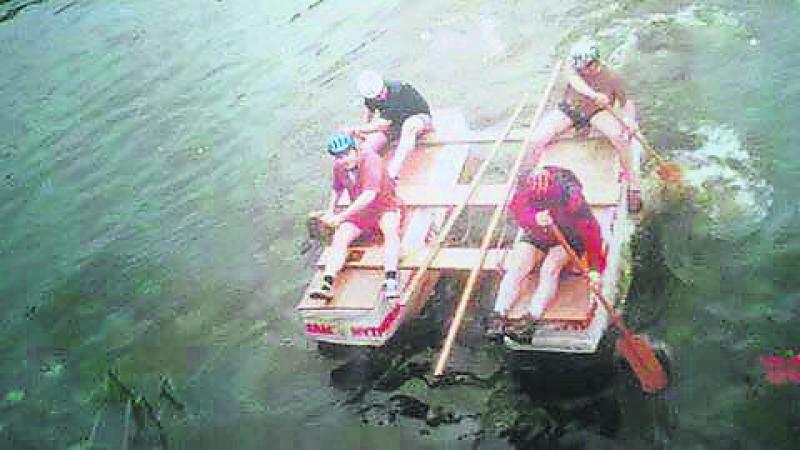 One of the rafts that took part in a previous Ballymahon raft race, over sixteen years ago.

The community of Ballymahon is planning a raft race over the August bank holiday weekend “just for the craic”.

And that's as good a reason as any to get people to gather materials, build their own rafts and race them down the River Inny.

“This will be the first Ballymahon Raft Race in 16 years,” explained organiser, Jenny White, when contacted by a very curious Longford Leader reporter last week.

The idea is that teams of four will get together to design, build and race their own raft down the river - sort of like the Red Bull competition, except not with homemade planes.

“There's no entry fee,” Jenny revealed, adding that there will be a voluntary donations bucket should anyone want to give a little.

Monies raised on the day will be split between Bridgeways Family Resource Centre, Ballymahon Tidy Towns and the Convent House Daycare and Resource Centre.

Surveys were carried out on the river and the canal recently to determine which would be the best waterway on which to host the race and, because both were equally suitable, the organisers put the question to the public.

A Facebook poll revealed that almost 80% of people would like to see the race take place on the river.
“Both are equally deep,” Jenny explained.

“The river has some shallow areas and some deep areas, whereas the canal is the same depth the whole way along - but it's got all the weeds at the bottom.”

If poll figures are taken into account, the event will take place on the River Inny and will last an hour and a half, with participants paddling from Newcastle Woods to Ballymahon.

The race will be followed by a barbeque in Skelly's Bar.

“It'll be a great day out for the community,” said Jenny.

“It's a free event and we're doing it literally just for the craic.

“We're also doing it on the basis that we want to create some sort of festival based around the river, starting next year.”

Festivals go down well in Ballymahon and this one will be centred around family fun events such as tug-o-war matches, a raft race, possibly a fun run. Details will be sorted out in the next 12 months.

For now, though, the focus is on the Ballymahon Raft Race and, if you want to enter, there are a few simple rules.

“Everybody has to register before the 28th of July,” Jenny explained, adding that there has already been a huge interest in the event.

Teams can be made up of four people - preferably with a mixture of men and women.

“Everybody will come down the evening before the race with their raft so we can see if it floats and if it's safe,” said Jenny.

“The raft has to be built by the teams, but can't be made using other rafts - so you can't tie two canoes together, for example.”

Basically, don't build your boat out of boats.

There are a few other simple rules - those under 16 years old have to have an adult with them. Under 16s also need to wear a helmet, and everyone needs a bouyancy aid. But aside from that, the only rule is to have fun.

“It will be a great event for the community,” said Jenny.

Anyone who would like to help out on the day is welcome to contact Jenny White on 087 663 8666.
The Ballymahon Raft Race will take place on Sunday, August 5, at 3pm.