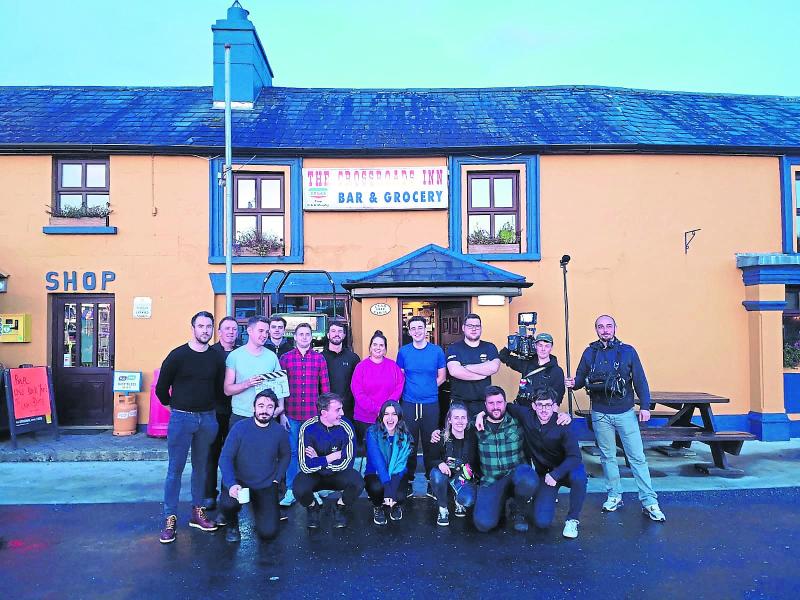 Drifting: The cast and crew outside the Crossroads Inn pub in Lisryan, one of the Granard locations for the film

A number of Longford filmmakers have just finished their latest production, Drifting, which was filmed in Granard.

Drifting was written and directed by Robert Higgins and Patrick McGivney. The production team included Chris Higgins, Jason Gaynor and Tomas Devaney – all from Granard.

The new film tells the story of two young men, Pat and Cian, who have been joined at the hip since they were kids and have the run of their small town in the midlands.

Cian is content to coast through a life of booze and casual hook-ups but Pat is considering moving abroad. The film takes course over a 24 hour period when Cian’s reckless behaviour forces Pat into telling him about his plans to emigrate.

The team’s first short film Angels Guard Thee premiered at Cork Film Festival and has since played over fifteen festivals worldwide. It won Best Cinematography at the Queens Film Festival in New York earlier this year and will be broadcast on RTÉ in December.

The next step for the team is a couple of months of editing and finalising the production in the hope of premiering it next year.

Also read: Could you be Ireland’s Young Filmmaker of the Year 2020? Entries now open!