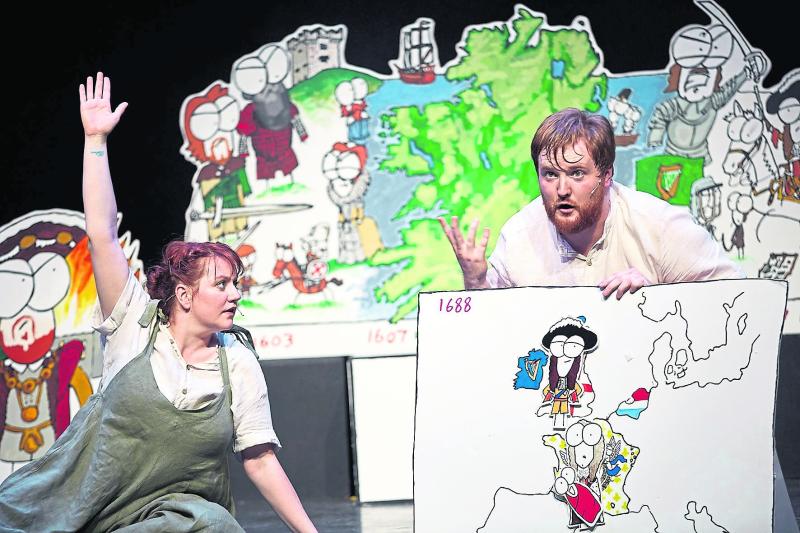 Louise Conaghan and John D Ruddy will perform Manny Man and the History of Ireland on March 5.

A Donegal-made theatre production based on a YouTube sensation will come to the Backstage Theatre in early March.

Based on his hugely successful YouTube series and published books, John D Ruddy brings Manny Man and the History of Ireland to the stage, starting with its first shows at An Grianán Theatre, Letterkenny next Tuesday, February 5 and coming to a close in Ennis, Co Clare on St Patrick’s Day.

The show will stop in the Backstage Theatre for one performance on March 5. Brought to you by An Grianán Theatre Productions, featuring actors John D Ruddy and Louise Conaghan and directed by Rachael Devir, watch Syn and Oppy as they plough through Irish history with illustrated cut-outs and craziness on their nationwide tour of the island of Ireland.

The show journeys from the Ice Age, all the way to Ireland today, and all in less than 90 minutes, with the same tongue-in-cheek humour Manny Man is known for. When it comes to fun history, Manny Man is your only man!

John is an actor, writer, YouTuber and theatre-maker from Letterkenny who has worked extensively with An Grianán Theatre, Letterkenny. Most recently, he has written and starred in Manny Man Does the History of Ireland On Stage (2018-2019).

John has also performed in Fiesta (2014-2015), I Would Walk These Fields Again (2015-2017), and Unified: The Musical (2016) by Guy Le Jeune respectively. John is also the author of Manny Man Does the History of Ireland (2016), Manny Man Does Revolutionary Ireland 1916-1923 and creator of the YouTube history series Manny Man Does History which has garnered over 30 million views.

"I'm very excited to bring the History of Ireland to life on stage across the country,” he said.

“People can expect plenty of laughs, a couple of tears, and they might even just learn something if they're lucky.  Kids will enjoy it, adults will enjoy it, and history buffs will get a good kick out of it!”

Louise Conaghan is an actor, street theatre performer and writer from Ballybofey and splits her time between Belfast and Donegal. A graduate of The University of Ulster with a BA Hons in Drama and a National Diploma from the North West Regional College, Louse has also undergone Clown Training in The Actors Space, Barcelona; In Your Space Circus; Mooky Cornish; and Amadan Theatre Company.

Louise was awarded further funding by the Arts Council of Northern Ireland to write, devise and perform in her own: A One Woman’s Show (Working Title), through the General Arts Award SIAP scheme, working with Patrick J O’Reilly.  This summer she will collaborate with Zona Dance Academy on their end of year show: The Lion King.