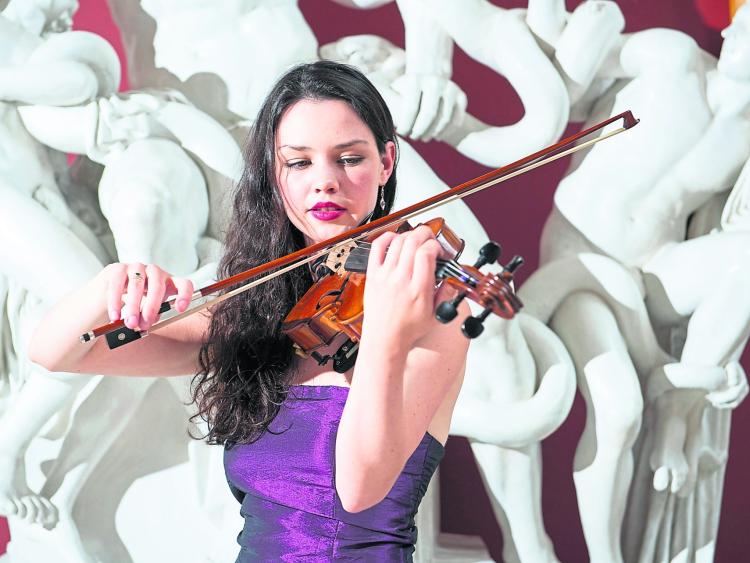 The 2013 winner and award-winning violinist Mairead Hickey at the launch of the €5,000 Frank Maher Classical Music Awards for 2018. Photo: Gerard McCarthy.

The search for Longford entries for Top Security’s Frank Maher Classical Music Awards for 2018 has begun and, with a €5,000 top prize, they are Ireland’s largest classical music competition for secondary schools.

The 2013 winner and award-winning violinist Mairead Hickey was at the launch in the Crawford Art Gallery and, as this year’s competition is taking place earlier than usual, the closing date for entries is now Friday September 14, 2018.

The Frank Maher Classical Music Awards were created in 2001 by Emmet O’Rafferty, chairman of the Top Security Group, to showcase outstanding young talent in classical music.

Past winners have received national and international recognition for their achievements and used their prize money as a springboard towards a professional career by funding their studies at some of the world’s most renowned music colleges and institutions, the Barenboim-Said Akademie, Royal College of Music, Conservatoire Nationale Superieur de Musique et de Danse, Kronberg Academy and the Meadows School of the Arts to name a few.

Emmet O’Rafferty said, “I established the Awards to honour the memory of one of my late teachers, Fr Frank Maher, who was a pioneer in the nurturing of musical talent in secondary schools. He would have been delighted with the number of incredibly gifted musicians they have attracted over the years and I wish this year’s prospective entrants the very best of luck.”

The Awards are open to sixth year post-primary students of string, woodwind, brass and piano.
The €5,000 top prize will be used by the winner to attend a recognised place of tuition, a course of study in Ireland or abroad or on a purchase necessary for the development of their talent. The finalists will each receive a €250 bursary.

Mairead Hickey added “Winning the Frank Maher Classical Music Awards was a wonderful and important career stepping stone for me. It has helped to open doors professionally, so I would certainly be encouraging any aspiring young musicians to enter the competition.”

The closing date for entries is Friday September 14 2018. Seven finalists will be selected by an independent board of adjudicators to attend the competition night on Friday 5th October 2018 at the Royal College of Physicians in Dublin to perform in front of an invited audience.

Full details, including rules and a copy of the application form for downloading, are on www.frankmaherclassicalmusicawards.com