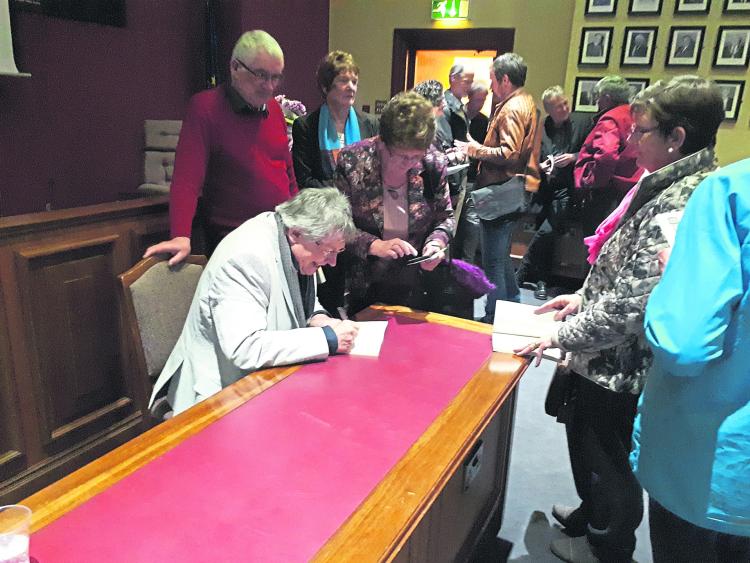 ‘Poets are the unacknowledged legislators of the world’

“Percy Bysshe Shelley is smiling this evening in this building of law and order,” added McMonagle before pointing to the “handsome and impressive volume” that was Chalk Dust.

“In an earlier poem called ‘Fallen Ladder’ from his 1991 collection Opposite Walls, Noel Monahan tells of a magical moment in childhood - a moment when poetry came alive for him - his father had climbed to the eves to inspect the roof, his mother held the ladder and she says, ‘he could rise above his station, up Jacob's Ladder into heaven’, her words echoing that moment in Genesis, Chapter 28; ‘How magical they were, how magical’, were for the budding poet something special years later remembering how her words danced inside him. “Monaghan says ‘I slowly mapped the climb’.”

And indeed, that climb as described within the poem tells of personal disappointment and disillusionment.

Dr McMonagle added; “The poem ends with the realisation that there was nowhere to climb, but there was another climb for Noel Monahan, the climb of Mt Parnassus”.

Meanwhile, Noel Monahan has published seven collections of poetry with his last collection ‘Where The Wind Sleeps, New & Selected Poems’, published by Salmon in May 2014.

“Here is a poet through seven collections,” said Dr McMonagle, “that is consistently challenging himself and has brought with him along the way, a substantial, engaging and companionable body of work.

“His latest book Chalk Dust is a book in four movements; the collection opens with an endograft - the poem ‘Still Life Study’ dedicated to Padraig Lynch whose wonderfully evocative paintings - and his other work - are featured in ‘Chalk Dust’ and in several of Noel’s other collections.
“‘Still Life Study’ is a poem carefully and beautifully arranged on the page; it presents us with words that capture a school room and the spaces, the silences surrounding those words allowing memory to play its part.

“Be it the homeless on Grafton Street, the once a year mass-goer, having to drive to your local hospital 12km away with your blood samples, or banking online, focusing on past and present Noel Monahan’s opens up for the reader a vast historical perspective and this is seen in the very first poem in the book.

“The subject matter of the poem is familiar to every Longford native and to visitors in the National Museum, and to archaeologists and historians.”

In 2001 he won The PJ O’Connor RTE Radio Drama Award for his play Broken Cups and in 2002 he was awarded The ASTI Achievements Award for his contribution to literature at home and abroad.

His work has been translated into Italian, French, Romanian and Russian.

Stunning! Quaint two-bedroom house on sale in the Premier County for just €110,000