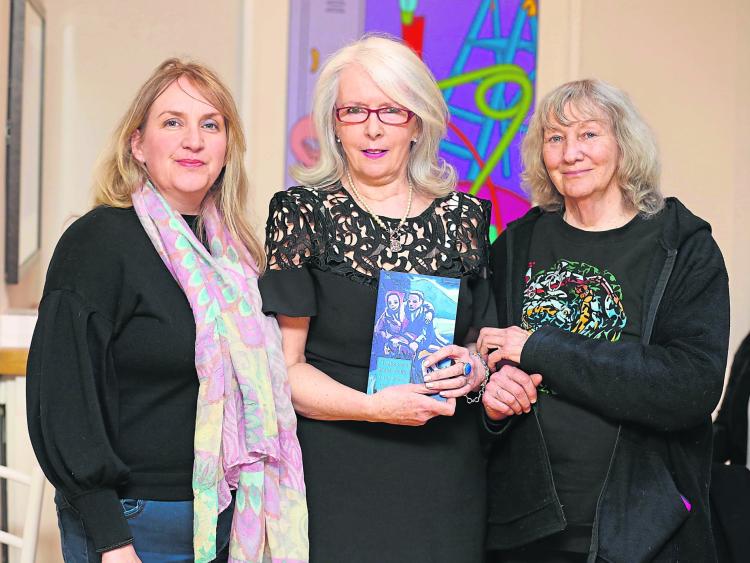 Mary Melvin Geoghegan launched her fifth book of poetry ‘As Moon and Mother Collide’ recently at Backstage Theatre and well-known poet PJ Kennedy carried out official proceedings on the night.

“In Mary Melvin Geoghegan’s poetry we all can travel near and far, go with her through Co Roscommon, meet her landmarks and help her to find the backroads,” Mr Kennedy added, before pointing to other musings within the covers including the night nurse ‘tipping about’ to make sure her patients are comfortable!

“Mary stops at the graveyard and sees that her grandparents are ‘safely tucked up in eternity’ and allows us to travel with her to art galleries and far away places, like Madrid, or nearhand to a wedding in Wicklow.

“Get on the bus near the Botanical Gardens, alight at Phibsboro beside where the cattle market was, or as Mary called her poem ‘Ghost of the Mart’.”

Mr Kennedy went on to say that the Longford woman’s poems within the covers of ‘As Moon and Mother Collide’ brought readers through many borders and gates “golden or not”.

“Her poems,” he continued, “learn us to enjoy what we remember”.

Meanwhile, Ms Melvin Geoghegan paid tribute to all those who helped her along the way and heaped special thanks on painter Bernard Canavan for allowing her to reproduce his ‘The Dance’ on the cover of her new book.

She said the effort allowed her to combine her love of poetry writing with her second love - that of art!

“The title poem for this collection ‘As Moon and Mother Collide’ was written during a workshop in 2012; we were workshopping a Kathleen Jamie poem, Moon -from her collection ‘The Overhaul’ - which was later published in the literary magazine Sylight 47 in Galway.

“This allowed me to trace the possible influence of that poem in the moon as the maternal, female psyche and mother as being the reservoir of what’s secretive, hidden and unknown - change.”

The local poet went on to say that she was really drawn to a Vona Groarke quote that she had stumbled upon recently; ‘poetry tends to like blind spots it so often burrows where it really aughtn’t to or delves past decency and approbation in the predicament’.

“I am both grateful to you all for being here and very excited about this latest book.

“It is one that I hope everyone will enjoy.