Emerging from 'The Ruin' with a new lease of life 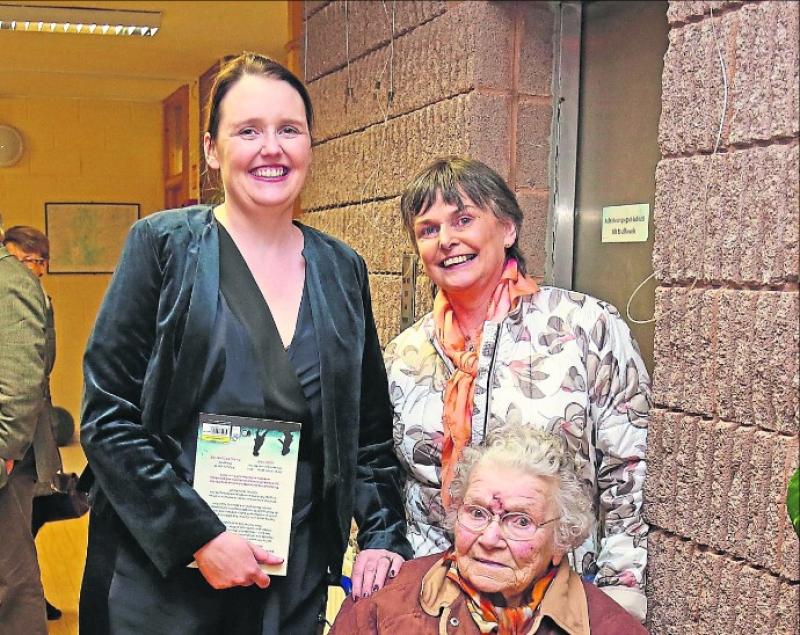 The book has only hit the shelves in the last couple of weeks and is already climbing steadily in the book charts.

Her Longford connections are very strong with her father Enda McGowan hailing from Newtownforbes.

Dervla’s childhood memories of the area are central to her first novel which really is a great read.

On launch night, she read a section from the prologue which centres around two children - Maude and Jack - sitting in a big old crumbling house waiting for Garda Cormac O’Reilly to arrive while their dead mother lies upstairs in her bedroom.

And, because the author herself spent a lot of her childhood in the south Longford village of Newtownforbes exploring the area and playing with her cousins, the Quinns, her “magical” childhood memories which extend to the exploration of Castleforbes have in many ways sown the seeds for setting this very scene in ‘The Ruin’ which, it has to be said, is now receiving rave reviews across the globe.

“The heart of the story, for me, is in the prologue,” she told the Leader, before pointing out that while in one sense, an author weaves a story out of air, they are at the same time, drawing on all of their life experiences.

“It’s funny the things that really stick with you; when I was a little girl, there was one time when we visited Longford and my aunt Eimear brought us for a walk around Castleforbes.

“She brought us across fields and in a backway, and for a child when you come through a hedgerow and these woodland paths open up in front of you into lily ponds and everything else, it is just magical.

“And I think there is something of that almost other world in the book.”
As Dervla pointed out, the book opens up with a scene at an old crumbling hunting lodge where the children in situ are descendants of an old Anglo-Irish family.

She said their mere existence and how they come to be is a very real part of Irish history.

But, as they say, it is no mean feat for an author to get to this point and for Dervla, there is a story within the story!
“It has been a very interesting journey for me, right from the very beginning,” she smiled, pointing out that it started back in July 2016 when her life took “a little bit of a left turn”.

“I was having headaches and my husband encouraged me to go to the doctor, so I went to the doctor and I was sent for tests and a precautionary MRI.”

She recalled not thinking too much about the situation and calmly setting out for her GP one Friday morning to collect the results.
The local author had no idea, that in that moment, her whole world was about to change, and change utterly.

“I really didn’t think the smallest thing of it; I went into the GP and she said to me very straight; ‘Dervla you have a brain tumour; it’s really big, it has to come out and you need surgery straight away’.

“She wrote down the name of three neurosurgeons and told me that which ever one would see me first was the one that I should see.”
Slightly dazed, Dervla went back out to her car with her yellow post-it in tow and just as she was trying to figure out which doctor to ring her phone buzzed.

To paraphrase an old adage; ‘it’s an ill wind that does blow some good’, and for Dervla, in that moment, something amazing began to unfold.
“It was an email from a literary agent in a big New York literary agency telling me that she had read the first 50 pages of my book and she loved it,” she recalled.

“She also asked me to send her the rest!
“So, the whole journey in the year and a half since then has been just surreal.”

After the diagnosis, the author had surgery three weeks later and it was in the lead up to that, when she occupied herself “thoroughly” with sending the book out to literary agents.

It kept her focused, she says.
Two or three weeks after the surgery the first offer of representation came in from a literary agent and ‘The Ruin’ went out on commission shortly after that.

“Next thing was these offers of publication started coming in and it really has been a joyful, surreal, exciting and life-changing journey.
“I still can’t quite believe that all of this is happening.”

Dervla also says that when she was developing her story she wanted above all else to write an Irish crime novel.

For those who have read Ken Bruen’s books, there is a hit of familiarity within the pages in terms of drama, intrigue and outcome.

“Your characters are formed by the context in which they live,” smiled Dervla, whose experience as a lawyer has given her firsthand insight into the way in which the system works - it is this knowledge, that is perhaps, central to The Ruin’s plot.

“Justice cannot be found in the law and anyone who has any experience of it will know that is the case; so some of that has probably fed into the story, in some sense, definitely,” she continued.

“I read a lot of crime and I would say that my favourite book last year was Don Winslow’s 'The Force'.

“There are also so many amazing Irish writers in crime right now and women in particular - Liz Nugent, Sinéad Crowley, Catherine Ryan Howard; there is just so much talent out there.”
And as the old adage goes, behind every great woman, there is an equally great man!

Dervla is adamant that she couldn’t have gotten to where she is today without the loyal support and encouragement of her husband, Kenny.

There are so many people I have to thank and the first person is my husband, Kenny,” she smiled as she recalled his support and the way in which he cared for the couple’s children when Dervla was recuperating and subsequently promoting her book thereafter.

“Kenny has supported me in everything I ever wanted to do; way back a few years ago when I told him that this was something I always wanted to do and I really want to try this, he encouraged me in the most Irish way possible and said; ‘sure why wouldn’t ya’.
“He has been fantastic.”

‘The Ruin’ is on sale now in all good bookshops.

Launch of much anticipated 'The Ruin' at Longford Library