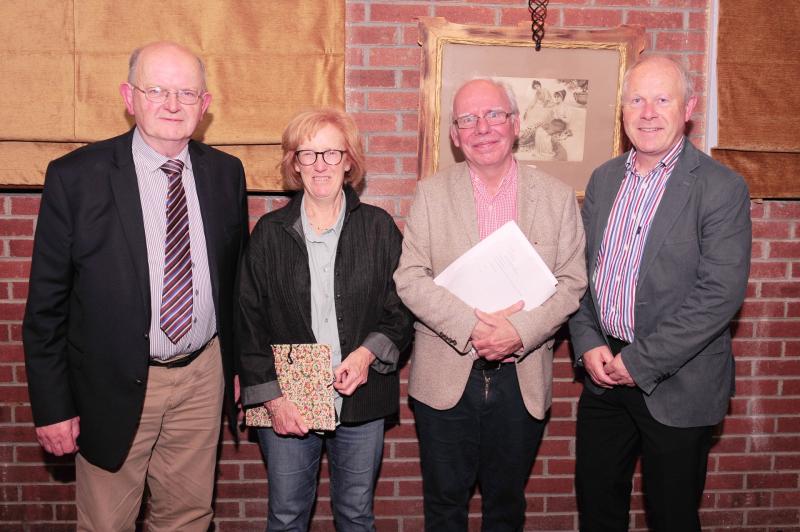 There was much excitement in ‘Goldsmith Country’ over the Bank Holiday Weekend as the 33rd annual Goldsmith International Literary Festival kicked off with a range of literary events for fans of the Longford-born poet.

The festival, which is one of the longest-running festivals of its kind in Ireland, kicked off on Friday, June 2 in the Rustic Inn, with a large crowd in attendance.

Officially opened by CE of Longford County Council Paddy Mahon on Friday night, the festival provided several opportunities for locals - and those from farther afield - to get in touch with their literary sides.

Friday night included a very fascinating keynote address from Jonathan Moore, with a few tunes from the Innyside Singers thrown in for good measure.

The rest of the weekend featured a number of interesting events, including a literary tour, which took in Forgney Church and Pallas - the village in which Oliver Goldsmith was born - as well as other points of interest.

On Saturday June 3, there was a great turnout at the Goldsmith Summer School in Ballymahon, which was chaired by Joe Flaherty, and featured a number of guests who spoke on Goldsmith’s life and times in London.

Also on the programme were poetry at Pallas, a barbecue in the Three Jolly Pigeons, and plenty more to keep attendees entertained for the weekend.

Founded in 1984, to celebrate the literary genius of Oliver Goldsmith, and to promote Goldsmith Country as a tourist attraction, the festival has explored many aspects of Goldsmith’s life and work in the past.

The theme for this year’s festival was ‘Goldsmith and the Irish Experience in London’ and the motto that goes with the theme is ‘Every absurdity has now a champion to defend it’. This line is the preface to ‘The Traveller’, by Oliver Goldsmith.

“The reason we picked that theme is that England or the UK is our nearest neighbour and we have had an interesting relationship with England over the last three or four hundred years,” explained Arthur Conlon, a festival committee member, at the launch of the event.

“Goldsmith obviously is an Irish-born writer. But the fact is that he never wrote anything of note while in Ireland. And, like many Irish writers, he moved to England and wrote English-based literature for an English audience.

“So, while we claim him as Irish, we have to accept that he operated from England.”

Oliver Goldsmith lived in London for almost half of his life and wrote all of his published works while he was there.

The festival this year explored the social, political and physical world of London in the late 18th century and used these issues to put Goldsmith’s works in context. It also explored the effect that being Irish had on the writer while he was in England.

Chairman of the Goldsmith International Literary Festival, Seamus McCormack said this year’s festival was hugely successful, with large crowds enjoying each of the events immensely.