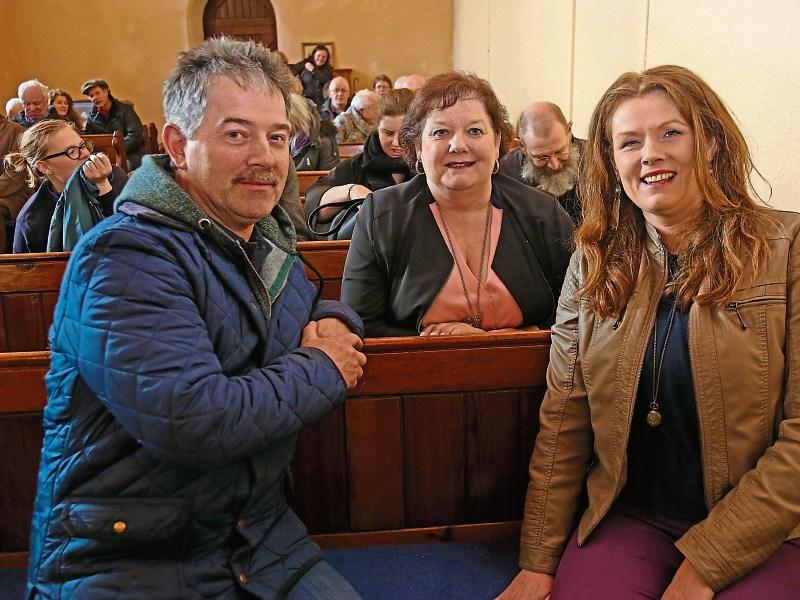 Tread lightly, she is near, Under the snow,

Speak gently, she can hear, The daisies grow.

All her bright golden hair, Tarnished with rust,

She that was young and fair, Fallen to dust.

Lily-like, white as snow, she hardly knew she was a woman, so sweetly she grew.

I vex my heart alone, she is at rest.

Peace, peace, she cannot hear Lyre or sonnet, all my life is buried here,

Heap earth upon it.

A poem written by Oscar Wilde after his beloved sister Isola died while visiting family in Edgeworthstown in 1867.

And this, alongside a lot of other Wilde material will be discussed in depth during the ‘Isola Wilde Remembered’ event which takes place in St John’s Church and at St John’s Rectory on Sunday, February 26 next at 3pm.

“Edgeworthstown, says local historian Matt Farrell, “will be forever associated with the celebrated Edgeworth family who settled here in 1619”.

He added, “But for at least one day, the focus will turn to the Wilde family”.

Much work has been done in recent years by the community in Edgeworthstown to unearth the legacy left in the area by many of the great literary minds of the 19th century, and Oscar Wilde was one of these minds.

“The birth of Isola, brought joy to the Wilde family,” continued Mr Farrell, before pointing out that ‘little Isola’ was the subject of Lady Wilde’s letter to a friend in which she stated that Isola had turned ten months old and was the pet of the house!

Lady Wilde added, “She has fine eyes and promises to have a most acute intellect- these two gifts are enough for any woman”.

However, tragedy struck in Edgeworthstown for the Wilde family on February 23, 1867 when, at just nine years old, Isola died at the family home of her aunt Emily which was St John’s Rectory in Edgeworthstown.

“It was a time that Isola was probably looking forward to her tenth birthday, and spending that happy period with her 13-year-old brother Oscar and her cousins Emily, Elizabeth and Margaret in Edgeworthstown,” said Mr Farrell, who has carried out extensive research on the Wilde family’s connections to Co Longford.

“The Wilde’s hopes and dreams were dashed and the family was left devastated at the sudden death of a beloved child.

“‘A sudden effusion on the brain’” was how Lady Jane described the tragedy.

The devastation was later expressed in a letter by Lady Wilde when she wrote that such sorrows were hard to bear.

“Isola was the radiant angel of our home and so bright and strong and joyous....Sir William is crushed by sorrow,” she added.

“Isola was his idol.

From research, we have learned that this was not the only tragedy to strike the Wilde family.

Three years later, in 1870, Isola’s beloved aunt Emily died and her two half sisters Emily and Mary died in a tragic fire in Monaghan.

Incidentally, Emily is buried in the graveyard in Tashinny.

“Oscar’s grief was expressed in his beautiful poem ‘Requiescat’ which he wrote in her memory.”

At the time of Oscar’s death in Paris, an envelope with the inscription ‘My Isola’s Hair’ and containing strands of his dead sister’s hair, was found among his possessions.

This now forms part of the Merlin Holland Archive.

Back in Edgeworthstown, the Edgeworth society erected a headstone to the memory of Isola in 2013.

Coincidently, a few months after the event something extraordinary happened; Mark Samuels Lasner, while working at the Free Library of Philadelphia, discovered a notebook that belonged to Oscar Wilde.

“This,” added Mr Farrell, “Has brought renewed focus on this period of Oscar’s life”.

The 142 page notebook of poetry drafts and doodles, dating from circa 1874-1881, contains some remarkable material relating to Wilde and his sister Isola.

It is these findings that will form part of a discussion on the subject at the event organised to remember this beautiful young child who has lain quietly in St John’s cemetery for 150 years, this weekend in Edgeworthstown.

The event is being organised by The Edgeworth Society and forms part of the programme of events planned for Edgeworthstown to celebrate a number of anniversaries connected to the Edgeworth family.

‘Isola Wilde Remembered’ will feature a talk by Eleanor Fitzsimons, writer and broadcaster, who has published a book ‘Wilde’s Women’.

‘Requiescat’ will be recited by local man Declan Neville who will also be accompanied by Nadine Smith on violin.

There will also be a talk by Wilde scholar Dr Jarlath Killeen from the Oscar Wilde Centre, School of English TCD.

Music at the event will be performed by the Mostrim Music Club and the ceremony will conclude with prayers by Ed Smith who is attached to St John’s Church.

The event promises to be very exciting and the Edgeworth Society is hoping for a good turnout.

Member of The Edgeworth Society would also like to take the opportunity to thank Angela Kingston of Australia; Linda Cox of Glebe House Tashinny and Neil Moxham for use of their research in the preparation of this article and the Merlin Holland Archive for the use of the image of the envelope.  For more details, checkout www.edgeworthstown.net