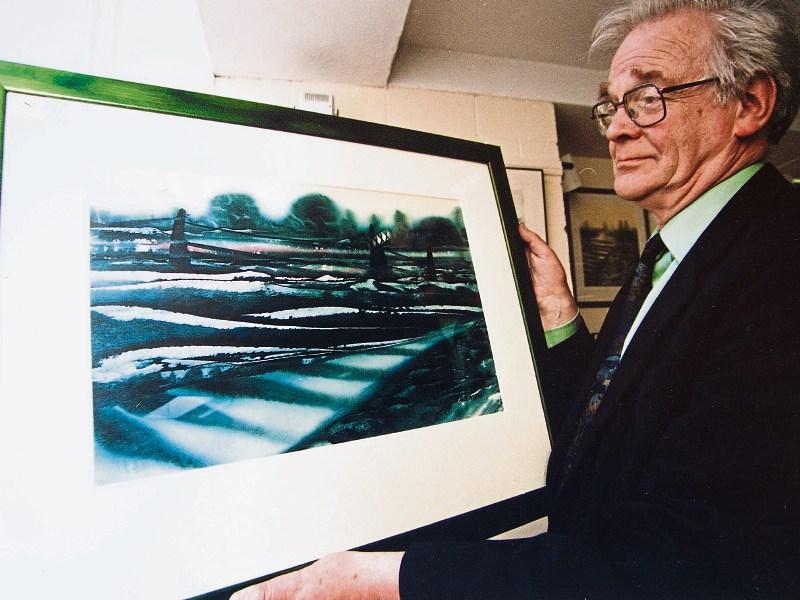 Two years after the passing of late artist JJ Macken, his family are celebrating his life and art with a special homecoming in Longford.

Born and raised in Longford town, JJ’s passion for rural life, country scenes and seascapes fuelled his pursuit of a career in art in the early 1960s.

Little did he know that one day rock icon Mick Jagger would pay big money to own some of his collection, former Taoiseach Albert Reynolds would become a loyal admirer and his work would hang on the walls of Leinster House.

After attending the College of Art in Dublin, JJ fell for the unpredictable nature of watercolours and spent the next 40 years developing his own techniques.

Although working as a primary school teacher at Drimnagh Castle Secondary School in Dublin, every evening he would come home and spend hours in his home studio.

The Longford landscape, the rushes of Roosky and the River Shannon provided huge inspiration for his abstract work, often painting from childhood memories.

Speaking about her husband, Áine Macken said he knew intelligence lay beyond one's ability to read, write and regurgitate information.

“He would stay in his studio for three or four hours every evening, nursing and babying his paintings. He would bring the children and myself in to pass judgement on them by times, young people’s views were very important to him,” she said.

“His painting was very personal. It was all from memory of Roosky, the midlands, Connemara, Spiddal, he never used photographs he didn’t believe in that,” she said.

A man of literature and music, his technique of ‘wet on wet’ watercolours meant that each picture he painted was unique in that it could never be exactly replicated.

Like many artists there was a chronological development in his choice of colours – a maturity his family now link to his personal journey through life as his family continued to grow up.

“He wasn’t a practical person, he didn’t see the dishes to be washed, he was totally a man of creation. He was a very happy person and we were very happy together,” she said.

After retiring from teaching, JJ volunteered to give art classes at Presentation Primary School in Terenure where he became known as the “artist-in-residence”.

“He told every child that you can’t make a mistake with art and made sure each felt good about what they were doing, he wanted children to love art and encouraged that right up until the day he had to go into hospital for an unknown reason,” she said.

After a wonderful evening exploring the artistic delights of Culture Night in the capital in 2014, JJ was hit with a sudden and unexpected illness.

At the time, he was in the midst of enthusiastically planning a major exhibition in his beloved hometown of Longford.

Just a few weeks later, JJ passed away peacefully surrounded by his wife and five children Anthony, Maria, Jimmy, Joe and Johnny. He was 74.

His work for his homecoming exhibition never left his easel.

Now his family are honouring his wishes by exhibiting a series of his recent collection at Longford Library. The exhibition was opened last Thursday by Bishop Emeritus Colm O’Reilly.

“His work has been exhibited all over Ireland and his paintings hang on walls all over the world. He was so proud to have patrons such as Mick Jagger and the late Albert Reynolds but never as proud as he was bringing his work back to Longford, his home,” said Áine.

“This exhibition was very important to him and we want to give everyone who knew him a special opportunity to celebrate the life he lived and the art he loved”.