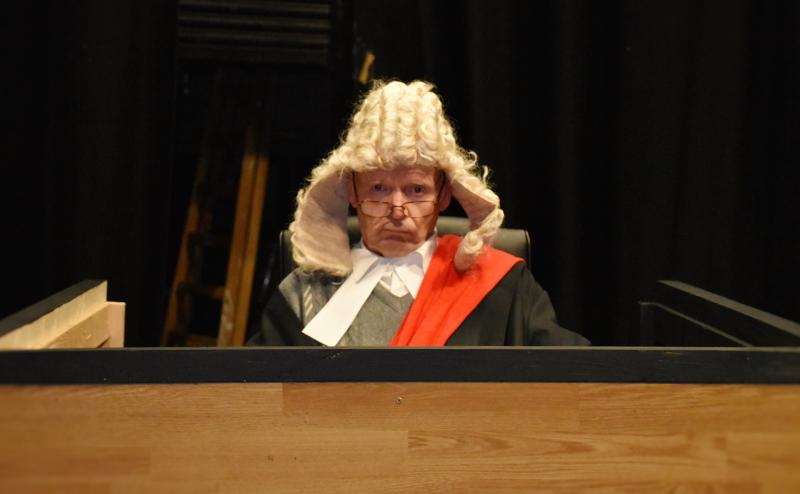 Moving away from their traditional evening of one-act plays, Backstage Theatre Group returned to the stage this Autumn with Jeffrey Archer’s courtroom drama ‘The Accused’.

Directed by Declan Donohoe, who also directed the award-winning ‘The Chipvan Plays Dixie’, the show was performed over three nights to very appreciative audiences from October 20 - 22.

From the start, the audience - or, more accurately, the jury - was immersed in the experience, being led into a beautifully-designed courtroom set. It was then that we left the Backstage Theatre and entered the Old Bailey.

‘The Accused’ centred on Dr Patrick Sherwood, who appeared before the judge accused of the murder of his wife. But could this respectable professional really commit such a crime and if so, what was his motive?

Those were some of the questions that audience members had to ask themselves, as the evidence was presented by a stellar cast, which comprised both BTG stalwarts and relative newcomers.

Pat Joe McLoughlin cut an imposing figure, watching over proceedings as Mr Justice Cartwright, while Ríona Lynch and Amy Oates (in the roles of Alison Ashton and Andrea Jarvis, respectively) brought some quiet calm to the legal proceedings.
Their bosses, meanwhile, Roy Davis and Phil Cox, portraying Anthony Kersley QC and Sir James Barrington QC, kept the audience on their toes with their rapid-fire questions and barked contradictions as the accused, excellently played by Tom Lyons, watched over the court, guarded by Guard Séamus McManus.

By the time the interval came around, there was no outside gossip or general chit chat amongst the audience. The question on everyone’s lips was: “Did he do it?”

It was the evidence of Jennifer Mitchell, delivered to perfection by Bernadette McGarvey, and later Dr Sherwood himself on which the decision hinged and in the opening night, it was not good news for the once-respected doctor. The first of two different endings caused gasps of shock throughout the audience.

A standing ovation brought an excellent evening’s entertainment to a close, but the interest and intrigue didn’t end there, with the audience filing out of the auditorium, still discussing their individual judgements and reasons.