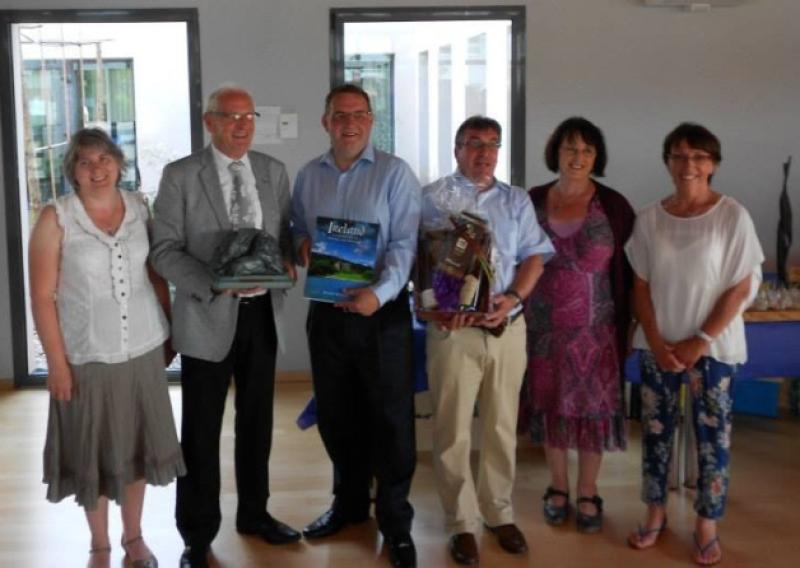 At a recent event in Essert, it was announced that a street in a new development was to be called Rue de Ballinamuck in tribute to their shared link with the Longford village.

At a recent event in Essert, it was announced that a street in a new development was to be called Rue de Ballinamuck in tribute to their shared link with the Longford village.

This was just one of several incredible events the Ballinamuck Twinning group took part in, with civic receptions in their honour being held in Essert and Besancon in Franche Comte and St Nabord and Remiremont in the Vosges, birthplace of General Humbert, the French commander at the Battle of Ballinamuck.

The local historical society and the local county council in St Nabord were particularly welcoming with a reception in the town hall followed by a typical Vosges meal in their local community centre, where there is a special room dedicated to General Humbert.

The Regional Council had also facilitated a programme of work experience for the young people of the group in various sites and sectors. They got the opportunity to work in a variety of settings for one week, including the cafeteria in the famous Peugeot car factory, a bakery, a crèche, a care home, a supermarket, a multimedia library. The leaders also had the opportunity to act as stewards for the famous Eurockennes Rock Festival.

This is the French equivalent of Glastonbury and ran over four days with an attendance of approximately 127,000. With headline acts this year including Blur and Jamiroquai, another big hit of the Festival was The Strypes from our neighbouring county of Cavan.

Many of the elected councillors and council officials expressed their disappointment on the absence of any representation from Longford County Council. Paddy Howe has extended an invitation to all to join in the celebrations at the Longford Gathering event, which will take place from September 6 to 8 in three locations; Granard, Ballinamuck and Ardagh.