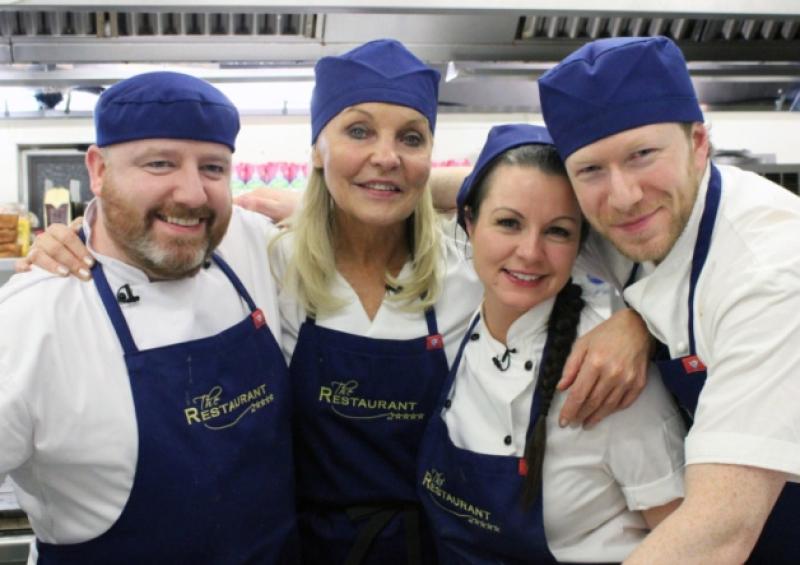 Longford viewers of ‘The Restaurant’ may have noticed a familiar face on the popular television programme as the latest series airs on TV3.

Longford viewers of ‘The Restaurant’ may have noticed a familiar face on the popular television programme as the latest series airs on TV3.

Gary O’Hanlon, head chef at VM Restaurant in Viewmount House, Longford, has joined the staff in the show’s kitchen, and is now on hand to assist the various celebrities who appear on the programme in an attempt to impress its team of merciless culinary critics.

“This is my first full series, but around three years ago I was on The Restaurant when they recorded Christmas and New Year’s specials, so I sort of joined the team then,” says Gary, who was also shortlisted to present ‘Masterchef Ireland’. “A slot opened up on the show and I auditioned, and around late October I was contacted to see if I was available.”

His addition to The Restaurant is the latest in a long line of television appearances for the Donegal native.

“That’s the nature of TV,” he says. “You can be doing nothing for ages, and then a lot of things come along together.”

The Restaurant recently transitioned from RTÉ One to TV3, but many familiar faces remain on board.

Gary went on to reveal that the entire series is filmed over a two-week period at Wineport Lodge in County Westmeath.

“We have our brief on the first night, and we film from Monday to Thursday. Then the restaurant would be stripped and prepared for normal customers over the weekend, and after that we’d start filming again.

“We start shooting at around 8am or 9am, and work right through until midnight or 1 o’clock in the morning.”

Gary, who is a self-confessed perfectionist, admits that working with celebrities in the kitchen can be challenging.

“I try to be as perfect as I can at Viewmount; if there’s a water mark on a plate, all hell breaks loose! Celebrities aren’t used to working in that environment and some will not take any direction or advice, but you have to remember that the camera is always on you.”

He laughlingly adds that if all else fails, “we can wash our hands of the dish during our tastings!”

In addition to the restaurant, Gary also appears regularly on TV3’s ‘Late Lunch Live’, and recently published his first cookbook, ‘Food for the Soul’, in association with Bluebird Care. However, he is adamant all this is secondary to his role as head chef at Viewmount House: “I only commit to these things once they don’t affect Viewmount.”

The Longford restaurant has won a string of prestigious awards since it first opened seven years ago, and Gary does not hide the fact he would like to add a Michelin Star to that list.

“That’s my goal. Any chef who says they aren’t chasing one is a liar!” he concludes.