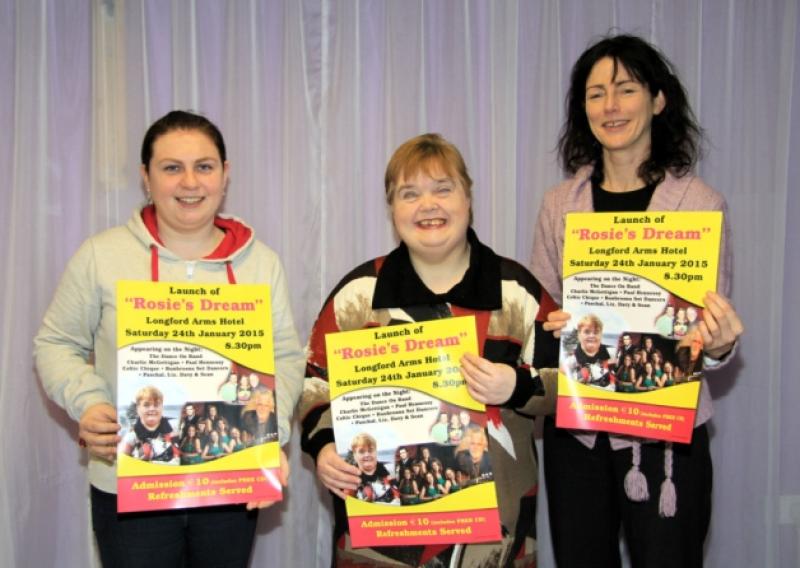 This weekend will see one local woman realise her dream of releasing her own CD.

This weekend will see one local woman realise her dream of releasing her own CD.

A native of Rathowen, Rosie Maguire will launch her CD, aptly entitled ‘Rosie’s Dream’, at the Longford Arms Hotel this Saturday, January 24 at 8.30pm.

Admission to this event is €10 and includes a copy of the 12-track CD, which was recorded at Real World Studios and produced by Paul Gurney.

The Westmeath woman has been singing all her life, and it is her music that has kept her going through both good times and bad.

A service user of St Christopher’s for approximately 20 years, Rosie is part of the Sonas unit, and very much part of all their musical events.

Indeed, Rosie is well known for her musical talents, and has performed at various competitions and occasions, to great acclaim.

In 2009, Rosie performed with a full orchestra in Cork City Hall, representing St Christopher’s Services at the Irish Performing Arts Song Competition. Rosie returned there in 2012, where she came third in the European Song Festival, representing Ireland.

More recently, Rosie performed a beautiful solo at the Christmas Concert of the Longford County Choir, which was highly praised by those in attendance.

Just last week, Rosie delivered a beautiful performance during the visit of 2014 Rose of Tralee, Maria Walsh to Longford.

A fantastic night of music and fun is promised and all in attendance will be treated to a live performance on the night by Rosie herself.