Several visual art, music, theatre, and literary events in store during this year’s festival, which takes place from July 23 to 26 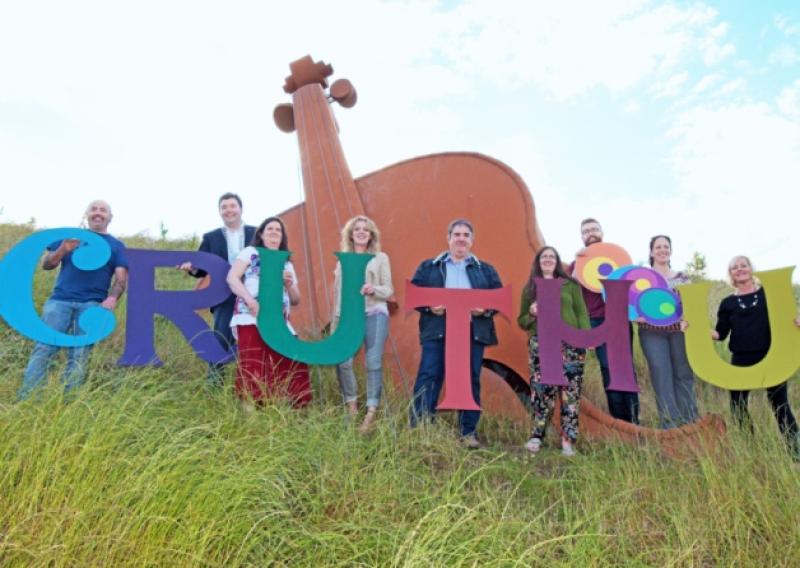 The programme has been launched for this year’s Cruthú Arts Festival, with a wide variety of visual art, theatrical performances, music, and literary events in store when it takes place in Longford town later this month.

The programme has been launched for this year’s Cruthú Arts Festival, with a wide variety of visual art, theatrical performances, music, and literary events in store when it takes place in Longford town later this month.

“After the success of last year’s festival, we’re delighted to be able to expand our programme for 2015,” said the festival’s chairperson, Patrick Conboy, who went on to point out some highlights.

“This year we’re proud to be staging theatrical performances at two local restaurants, where audience members can enjoy a meal while also enjoying the show,” he explained. “On Thursday, July 23, we will have a performance of a one-woman show called ‘A Game Called Lucy Finally Wins’ at Torc Café on New Street. It’s a play written by CC Kiely and stars Julie Sharkey as Lucy, who is taking part in a game show where stories of her life are revealed by chance and through audience participation. Tickets for the show cost €15, which will also entitle audience members to half a pizza and salad, and a quarter bottle of wine.”

“Barney’s will host a performance of ‘Flann’s Yer Only Man’, which is written and performed by Val O’Donnell, and is based around the life and legacy of Flann O’Brien and his alter ego, Myles na gCopaleen. It should be a real treat for fans of his work, and I suppose it could be marketed as ‘a pint, a pie, and a play’ as Barney’s will also include food and a drink as part of the €15 ticket price.”

Tickets for the two plays are available from the respective venues and from Longford Tourism Office on the Market Square.

Music will also be central to the Cruthú line-up, with intimate concerts scheduled for the Little Blue Room at John Browne’s Pub on Friday and Saturday, July 24 and 25.

“Spanish singer-songwriter Susana Garrido Pombo will be joined by Galway musician Kevin Herm Connolly and his band on Friday night,” Patrick continued. “We’ll have something of an Americana theme on Saturday evening, with US-based singer-songwriter Vincent Cross taking to the stage, and he’ll be followed by The New Breadwinners, a Dublin-based bluegrass group who brought the house down whey they played at the festival last year.”

The grand finale to this year’s festival will be another musical event, Sonic Sunday, which will take place at St John’s Church on July 26.

“It will be co-headlined by Nina Hynes and Fabien Leseure, Owensie, and special guests on the evening will be Longford’s very own Cronin,” Patrick revealed. “Both Nina Hynes and Owensie have been nominated for the Choice Music Prize in recent years.”

Patrick went on to say that the performance will be a sort of homecoming for Nina Hynes, who is flying in from Berlin especially for the concert with her husband, pianist Fabien Leseure.

“Nina was born in Dublin but her parents are from Longford,” Patrick said. “Her dad, Dessie, is a well-known publican who used to own O’Donoghoe’s in Dublin, while her mum, Celine, is also from the town.”

Tickets for Sonic Sunday cost €17.50 for main aisle seats and €12 for side aisle seats, and are available online from Tickets.ie and associated outlets nationwide.

“We will have storytelling, a street performance by Barren Carrousel at the Market Square, live street art by several well-known artists, the Expressions portrait photography exhibition, Bilberry Sunday at Ardagh Heritage Centre, book launches,traditional storytelling, and more,” he concluded.

For more details on the jam-packed line-up, visit the festival’s website at www.cruthuartsfestival.com.