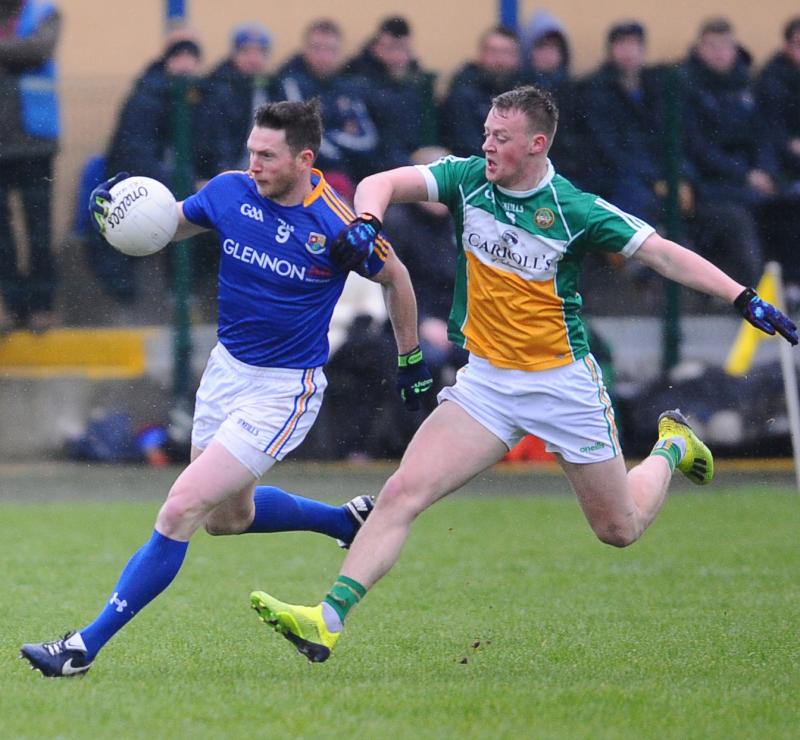 A pointed free from Bernard Allen in the 70th minute earned Offaly a share of the spoils against a depleted Longford side - minus their club-tie Mullinalaghta St Columba's contingent - in round two of the Allianz National Football League Division 2 at rain and wind swept Glennon Brothers Pearse Park on Sunday afternoon.

Longford lost Pauric Gill in the warm-up and then ace forward Robbie Smyth had to go off injured.

After their 1-8 to 0-9 away win against Louth the previous week, drawing with Offaly wasn't the worst result in the world for Padraic Davis charges who will learn more about their mettle in the weeks ahead. Unbeaten Longford, who have scored just 2-14 in their two games to-date, travel to Netwatch Dr Cullen Park next weekend to face Carlow.

The equalising free from Bernard Allen came after Longford tried to keep the ball and ‘keeper Paddy Collum was penalised for over carrying.

Played in wet and miserable conditions, the swirling wind didn’t help either side. For all their possession in the opening half Longford led by a goal at the break: 1-3 to 0-3.

Within the first minute of the game Robbie Smyth forced Offaly keeper Paddy Dunican into making a fine save. Smyth had been fouled in the build-up and a free was awarded which Darren Gallagher converted. Nigel Rabbitt then followed up with a fine point.

Offaly’s opening score came from a Bernard Allen free after he was fouled in the 12th minute. One minute later Longford stretched their lead to four points when Liam Connerton passed to Gallagher he found the back of the net, 1-2 to 0-1.

Anton Sullivan got Offaly’s second point in the 14th minute. Points were traded between Mark Hughes and Allen (free) and that was the first half scoring finished in the 18th minute, 1-3 to 0-3.

Longford should’ve added to their score but squandered chances. In the 31st minute Dunican denied Smyth from getting a second goal for Longford while down the other end Gallagher caught Allen’s free on the line.

Offaly started the second half brightly with two quickfire points from Allen cut the gap to just one in the 37th minute. Allen then set up sub Shane Tierney in the 39th minute to draw John Maughan's side level, 1-3 to 0-6.

Michael Quinn edged Longford ahead with a terrific point in the 40th minute and then three minutes later his midfield partner Gallagher scored one just as good. Sullivan and Gallagher exchanged frees as the game entered the final five minutes, 1-6 to 0-7.

An excellent point from Eoin Carroll cut the lead to one point in the 65th minute. Longford should have extended their lead but failed to and then at the end Allen earned his side a hard earned point.