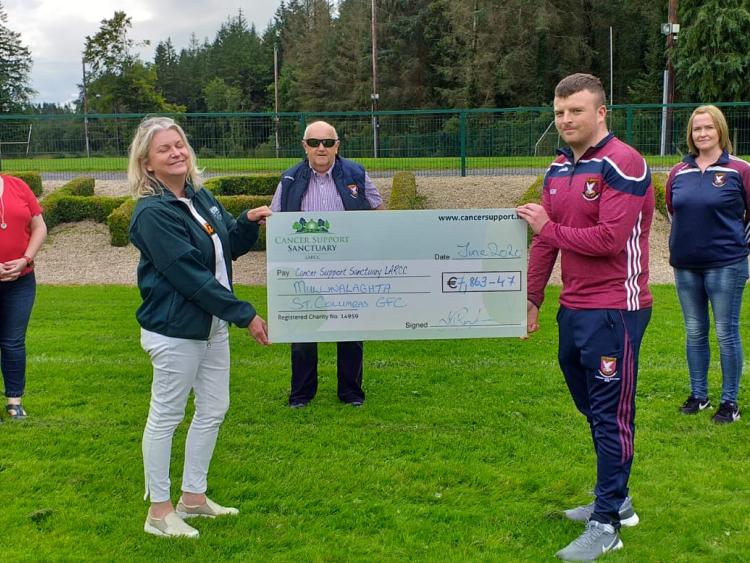 Mullinalaghta St Columba's GFC presented a cheque for €7,863 to local Cancer Support Sanctuary, LARCC (Lakelands Area Retreat & Cancer Centre), which is based in Multyfarnham, Co Westmeath following their ‘Your Colours for Cancer’ fundraiser held during May and June. Picture shows David O'Rourke presenting the funds to Bernie McHugh of LARCC and also in the photo are Pauline McNerney (Treasurer), Kieran Rogers (Chairperson) and Sinead McCormack (PRO)

Mullinalaghta St Columba’s GFC helped raise the fantastic sum of €7,863 for the LARCC Cancer Support Sanctuary with their ‘Your Colours for Cancer’ fundraiser which took place during May and June.

The presentation of the proceeds from the fundraiser were handed over to Bernie McHugh, General Manager of the Cancer Support Sanctuary (LARCC) on Thursday, August 6 in The Laurels.

Ms McHugh said LARCC was delighted to receive such a generous donation and added that ‘it would be a huge help to LARCC as they continue to provide their services to individuals and their families living with cancer’.

Chairperson Kieran Rogers said Mullinalaghta St Columba’s GFC would like to thank the unbelievable generosity of every single individual who donated to their fundraiser.

“To raise €7,863 exceeded our expectations,” explained Mr Rogers, and he continued, “We were delighted to make the presentation to LARCC and to support the tremendous work that the Cancer Support Sanctuary in Multyfarnham does.”

Mr Rogers also acknowledged and thanked the Longford Leader for the extensive promotion and coverage of the event which helped the club reach such a large sum for their chosen charity.