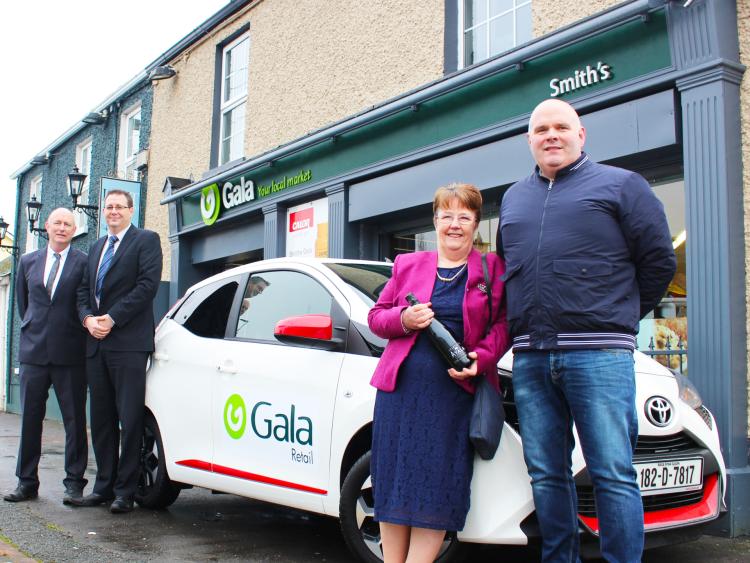 It’s been a prosperous start to 2019 for one lucky lady in Newtownforbes, who has been presented with a brand new 181 Toyota Aygo, courtesy of Gala Retail.

Geraldine Mahon won the top prize in Gala Retail’s biggest ever ‘Gala Gifts’ promotion, which gave Gala customers the chance to win one of three Toyota Aygo cars and 150,000 instant prizes when they spent €10 or more to receive a ‘Gala Gifts’ scratch card.

Geraldine entered the competition in her local Gala store, Smith’s Gala in Newtownforbes and was presented with her top prize by store owner, Niall Smith.

Speaking at the prize presentation, Geraldine said: “I still can’t believe that I’ve won. It was such an unexpected surprise when Gala contacted me to tell me the news and I can’t wait to get on the road in my new car, it’s a great start to the New Year!”

Owner of Smith’s Gala, Niall Smith, added: “We are thrilled that one of the winners of the car giveaway was a customer of Smith’s Gala! The Gala Gifts in-store promotion has been a huge success, with hundreds of instant prizes being won by our customers and to have one of the top prizes go to someone from our community is just fantastic.”

The ‘Gala Gifts’ in-store promotion was launched by actress and TV broadcaster, Aoibhín Garrihy, in November and ran in participating Gala stores across the country proving hugely popular with customers.

CEO of Gala Retail, Gary Desmond said: “Last year Gala celebrated its 20th year in business and as the year drew to a close, we wanted to go out on a high and launched our biggest ever in-store promotion as part of our ‘Gala Gifts’ activity.

“Our 20th year celebrations were all about giving back to our customers and the communities our stores serve and this has been a great way to round off the year and we’d like to say a big congratulations to Geraldine on her win.”