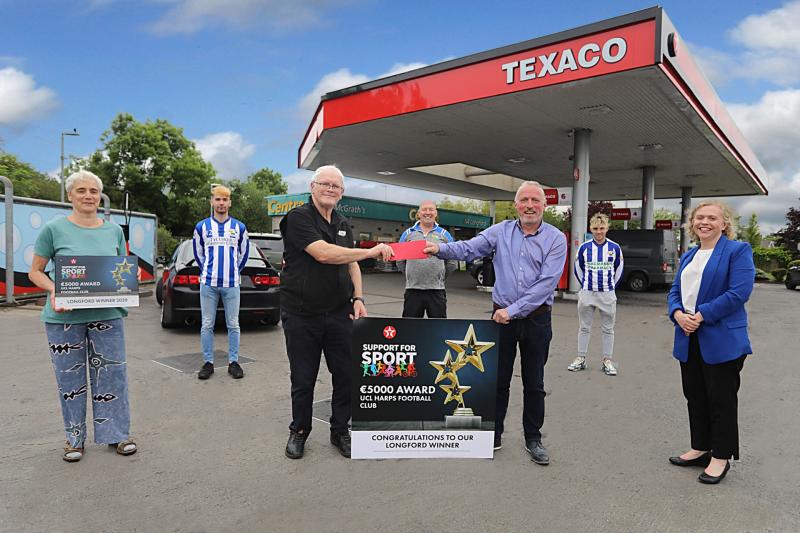 UCL Harps FC, the county Longford winners in the recent Texaco Support for Sport initiative, has been presented with a cheque for €5,000 to be used to purchase additional ground equipment in the form of mobile goal posts in full-size and for 7 and 5-aside use.

A brilliant display from the Ballymore ladies yielded a memorable win over Wexford opponents Kilmore in the Covid delayed 2020 Leinster Junior Club Championship Final at O’Moore Park in Portlaoise on Wednesday evening.

One of almost 400 clubs countrywide to make application under the scheme, the Club currently has a membership in excess of 200 boys and girls aged between 5 and 17 years and competes in the Longford District schoolboys and girls league.

The presentation was made to the Club by Valero Energy (Ireland) Limited – the company that markets fuel in Ireland under the Texaco brand.

Under its Texaco Support for Sport initiative, launched last September, a fund of €130,000 was set aside for allocation in equal amounts of €5,000 to successful applicants chosen on a county-by-county basis.

Entries to the Texaco Support for Sport 2021 initiative will open this Autumn.

The birth of a fantastic facility for Longford Athletics Club

Almost 200 of Longford Athletic Club’s junior members returned to training in the Mall in recent weeks after a long period of lockdown.