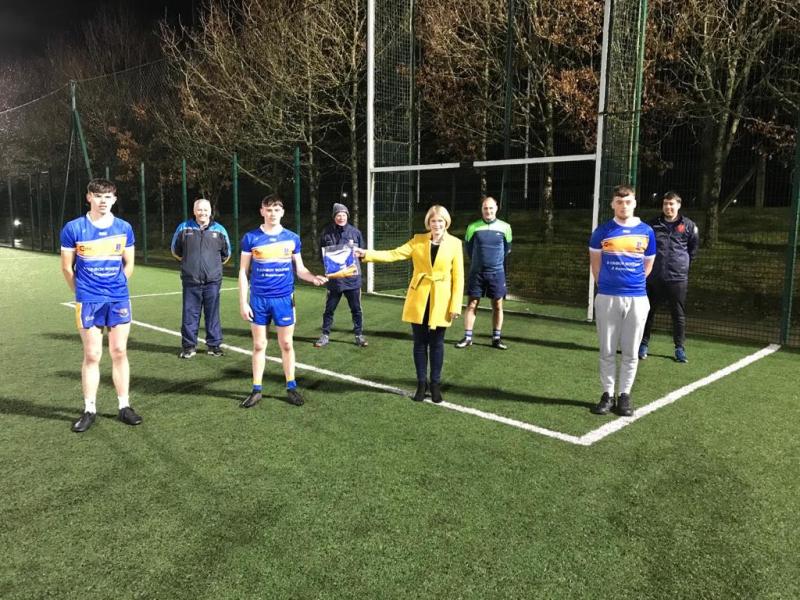 The annual general meeting of Dromard Minor club (St Francis) took place on Sunday, March 7. The meeting took place via the Go To Meeting app online and was attended by over 35 participants.

Chairman Cornie McGinley opened the meeting and welcomed all in these strange times.

Secretary John Duffy gave an account of last year’s AGM Minutes and followed with a comprehensive report on the activities of all the underage teams for 2020.

John explained that the club had been lucky to compete in championships in U12, 14, 16 and 18 given the different lockdowns which took place in 2020 which he described as an ‘’Annus Horribilis’’.

The academy for U6s was run every weekend when possible by Dermot Reilly and Johnny McGee.

Cornie McGinley and Colm Martyn did likewise with the U8s and while the club didn’t have blitzes for this squad there was plenty of activity provided throughout the year with Cornie organising online visits from the biggest stars of the game from Brian Fenton of Dublin to Ryan McHugh of Donegal and many more adding to the novelty of online skill challenges. Cornie and Colm certainly led the way during the first lock down.

U10s played a number of matches under the guidance of Michael O’Reilly and Raymond Taaffe.

Coiste na nÓg Longfort were praised for acting responsibly but also as quickly as possible.

However, the year was certainly not without its high points with the Minors capturing the 11 aside Minor Championship title for the second year in a row with the final victory by one point over Southern Gaels in Legan a hugely entertaining encounter.

Paul Hourican and David Pettit were at the helm of this team. Paul has announced his retirement from the role of coaching officer and has brought this team up from U6 with great success along the way. Hopefully, it won’t be long till Paul is back on the line with underage teams in Dromard.

Also Dromard juveniles (U16) were also victors in the 11 aside championship also overcoming Southern Gaels in the final of what was a very competitive competition. Bernard Sheridan managed and coached this team with assistance from John Duffy.

Bernard was wished a speedy recovery from his injury and hopefully he will be back on the field for the seniors and on the line with the minors very shortly.

The U14s were very competitive and despite losing a couple of players to injury came second in their group but came up short in the semi-final to a strong Southern Gaels team, this was again an 11 aside competition. Niall Vance put a lot of work in with this team and was assisted by Alan McLoughlin.

The club had good numbers at U12 level and were able to and facilitated by Coiste na nOg to enter two teams and in fact the second team were victors in the shield competition. Of course this was a mixed team with some fantastic displays by the girls on this team. Dermot Reilly was the busy manager of both these teams with assistance from Noel Reynolds.

John also brought us through the feats of or amalgamation teams with Colmcille/Ballymore at U14, 16 and 18 levels which saw us compete very well at 15 aside football which was the bedrock of Longford Coaching and Games plans a few years ago and which has been embraced by Dromard and Colmcille and while no trophy was lifted the experience gained by the players is evident by the fact that 9 of the 2019 minor championship runners up were invited to join this year’s County U20 panel, five from Dromard alone, Fionn Hourican, Aaron Farrell, Oisin O’Toole, Ollie Duffy and Conor McGauran.

Likewise, the U16s saw us being very competitive and reaching the final only to be beaten by an excellent Clonguish team by a goal. Indeed, the Covid 19 lockdowns left the preparation for these championships almost non-existent through nobody’s fault but hopefully 2021 will be better.

It was clarified that Coiste na nOg Longfort have said that the Minor grade would be moving to U17 for 2021 and that all other main grades would now be at odd ages.

Theresa Duffy then provided the attendees with a set of accounts in her treasurer’s report which showed the club with a small surplus for the year which was acclaimed as a huge achievement given the limited opportunities for fund raising in 2020.

Theresa drew special attention to the fact that we had a few special sponsors last year including George and Regina Conboy of George Conboy Roofing and Maintenance Ltd. Cornie McGinley of Costa Sales Ltd and Bernard Smith, formerly Fyhora of Clevrgifts.ie.

The Chairperson Cornie McGinley then addressed the meeting and thanked all the individuals who had helped with the various teams and with the club in any way. Cornie reserved special praise for the huge amount of time and efforts put in by John and Theresa Duffy in the running of the club. Cornie said he had come in this year and hoped to bring some new energy to the role of chairperson.

There followed very productive discussions regarding membership and especially the appointment of a coaching committee which will be chaired by Cornie McGinley and will appoint coaches to the various groups depending on the competitions when play resumes.

The minor Management were the only team management to be ratified with Cornie welcoming David Pettit and Bernard Sheridan as joint Managers of this team. John Duffy also agreed to be part of the management but pointed out the honour it is to have two hugely respected current senior players take on this role in the club.

Cornie outlined a possible opportunity for some of our young players to take on a leadership programme with the details to be shared with the various relevant groups.

All players who have been selected to represent the County were given a special commendation while the meeting ended with reflection and sympathy being extended to all families in the parish who had lost loved ones in the last year with John Duffy paying a special tribute to the St Francis Club founding member Johnny Cregan who went to his eternal reward in December 2020.

John said that Johnny had been a constant in both minor and senior clubs for as long as any member could remember and will be missed in the stands at every underage game of any note being played by Dromard. He will be remembered fondly by St Francis minor club.

Cornie McGinley closed the meeting with the hope that face to face meetings could be resumed sooner rather than later but that he would put in motion the agreed actions from this meeting without delay.