PICTURES | Bringing in the cavalry: Mounted Unit on patrol in Ballymahon and Longford

There was great excitement in Ballymahon last Thursday when two very special members of An Garda Síochána came to town.

Batman and Laoch of the mounted unit, along with their Garda handlers, Gda Claire Anderson and Gda Lisa Halligan, paid a visit to a number of Ballymahon locations at the request of Community Garda Emma Kiernan.

Their visit began at St Matthew's National School before the two horses made their way down Ballymahon’s Main Street and into Marian Terrace where they visited some very enthusiastic service-users at St Christopher’s.

They then paid a visit to Thomond Lodge and made their way back up the town where they greeted more of the local children before going to Longford town for a high visibility patrol.

Inspector David Cryan of the Community Policing Unit expressed his gratitude to the Garda Mounted Unit for coming to Ballymahon and Longford town.

“In Longford, we are patrolling the laneways and the streets of Longford and the canal on a high visibility presence,” he said.

“There’s great work being done there by Sgt Darran Conlon on the Community Policing Unit and the Mounted Unit have come down to assist us in our patrols of the area.”

Sgt Darran Conlon, who took over as Community Policing Sergeant earlier this year, told the Leader that offences such as littering, loitering, cycling on footpaths and other anti-social behaviour “will not be tolerated when I’m on the beat”.

Sgt Conlon has been on regular patrol in the laneways of Longford, with particular emphasis on Garvey’s Lane, which was on the route laid out for Batman and Laoch when they arrived in town.

“Today is about getting the horses on patrol to show we are serious about tackling these issues,” he said.

“There’s been a great response and it has uplifted everyone. It does make a difference and we’re going to get them back here again.

“The horses patrolled the streets and some of the laneways, the canal line and three or four housing estates.

“This is in support of what has already been done by the County Council, the regeneration team, the local traders and politicians.”

Sgt Conlon also expressed his gratitude to Inspector Cryan as well as Inspector Frank Finn for being there for the patrol and stressed that this is only the beginning of the concentrated effort he will be putting into ensuring Longford’s streets are safer and free of public order offences going forward. 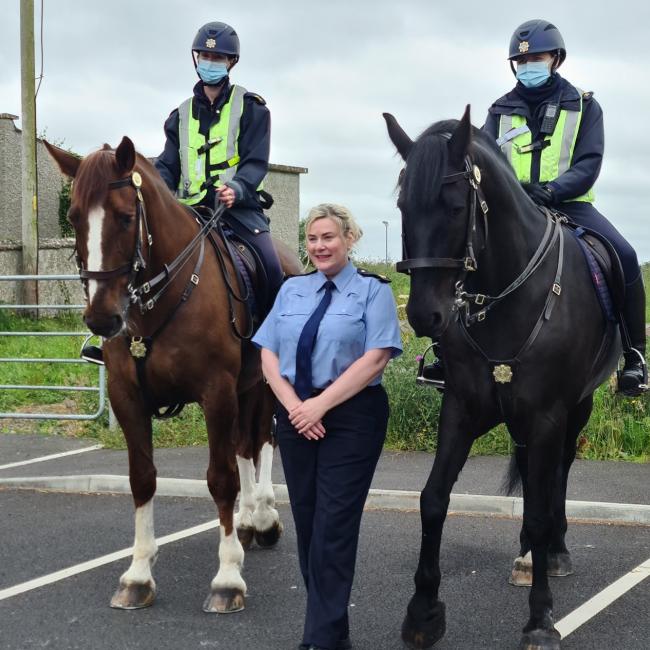