During the Papal Mass in the Phoenix Park this afternoon, Pope Francis asked for forgiveness for clerical sex abuse.

The next World Meeting of Families will take place in Rome in three years time.

Pope Francis admitted that the Church hierarchy had “kept quiet” about and “did not take charge” of painful situations.

“We ask forgiveness for the abuses in Ireland. Abuses of power, conscience and sexual abuses perpetrated by members with roles of responsibility within the Church,” he said.

He acknowledged not just the problem of sexual abuse in the Church but also referenced events that happened in Mother and Baby Homes, Magdalene Laundries and industrial schools.

Survivors of these institutions met Pope Francis for 90 minutes yesterday.

Also read: Gallery | Memorable images from day one of Pope Francis in Ireland 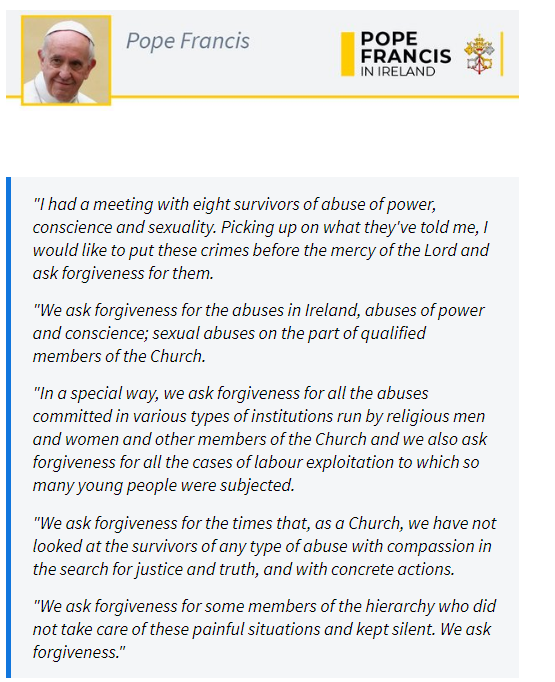 While the Phoenix Park Mass was taking place, a vigil took place in Tuam to remember those who died in the Tuam Mother and Baby Home.

Historian Catherine Corless, whose work uncovered details of the deaths of 796 babies at the home, declined an invitation from the Taoiseach's office to attend the civil reception with the pope in Dublin Castle this weekend.

At least a thousand people remember the #tuam babies - 796 names being recited by those here coinciding with Phoenix park mass #popeinireland pic.twitter.com/vjstHfQj2B

Thousands of people also turned out in Dublin City centre for the Stand4Truth rally at the Garden of Remembrance. Thosse who attended the Stand4Truth protest walked together towards the last Magdalene Laundry to close in Ireland - located on Seán McDermott Street and it closed in 1996. Organiser of the event Colm O'Gorman said the turn out was phenomenal.

Crowd at the Stand 4 Truth event beside the Garden of Remembrance #rtenews pic.twitter.com/tiloc5DdjV

Here are some images from The Phoenix Park. All photographs courtesy of Maxwells Photography.