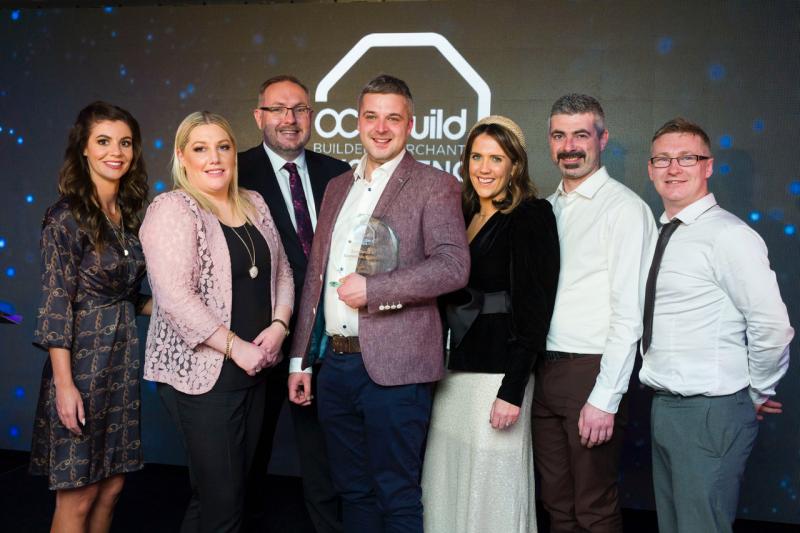 The business received its award on Thursday (7 November) at a gala awards event in the Aviva stadium in Dublin.

This award completed a hat trick of awards for the Ganly’s group, as Ganly’s Athlone won both the Connacht/Ulster Regional award and the award for Excellence in Sales & Marketing

The judges said that Ganly’s Longford was overall  “A very impressive store with impeccable standards. The retail offer is first class.”

They were impressed that the store is a member of WEEE Ireland and REPAK and with its work on environmental programmes.

Ganly’s Longford also recycles metal and timber and has installed an impressive LED lighting system. In addition it stocks and sells PFC timber and has actively lobbied suppliers to reduce packaging

Octabuild Chairman, Mark Filgate said: “It’s important for Octabuild that the Awards highlight to the building and construction industry and consumers, the excellence of Irish builders merchants. The  Awards, which have been acknowledging the best in the builders merchant trade for 35 years, were revamped for 2019 with a renewed focus on excellence. This is to better reflect the modern builders merchant sector in terms of business management, customer service, sales and marketing, innovation, leadership, diversity, partnership and communication.

"We are delighted with the enthusiastic response to the new style awards this year where merchants from all over the country have put themselves and their teams forward to showcase what’s excellent in the industry.”

Commenting on the quality of the entries, Chair of the independent Judging Panel, Liam O’Gorman, said: “It is clear that the industry in which today’s builders merchants operate has evolved hugely and that merchants have led the way in embracing this changed landscape. More sophisticated business systems, an enhanced skill base and a keen focus on the environment, health & safety and assistance for the local community feature strongly across the country and is highly commendable.”

In addition to the Ganly's group stores the other award winners are: