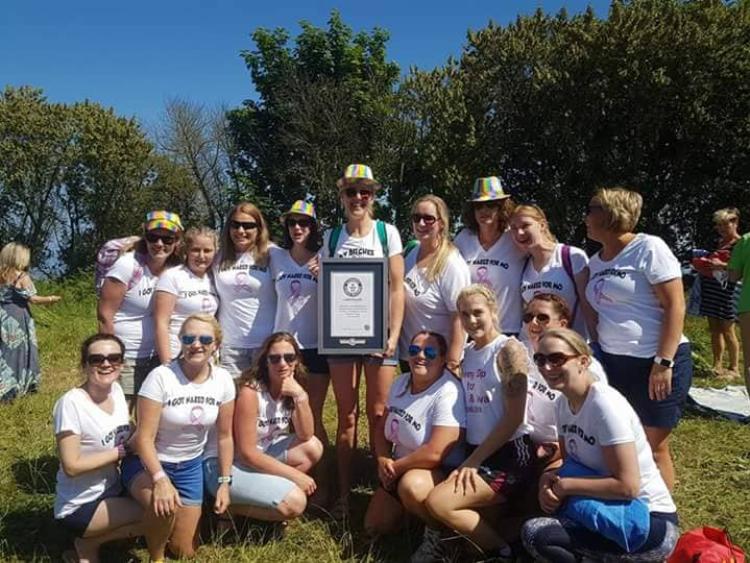 Longford was well-represented in last weekend's record-breaking 'Strip and Dip' event in Wicklow as 16 local ladies jumped into an empowering experience.

Led by Morag Patterson, the brave group of women got a bus to Wicklow to join over 2,500 women in the water to break the Guinness World Record for World's Largest Skinny Dip.

The previous record was set by Australia in 2015 when 786 people took part.

On the day, a Guinness adjudicator was on site to confirm that 2,505 women stripped off and spent five minutes in the sea.

“It's something I had wanted to do for a couple of years,” a thrilled Ms Patterson told the Longford Leader on Tuesday afternoon.

“I had one of my breasts removed in January so I decided to do it this year.”

Morag set about gathering a group of women who she said, with a laugh, she “guilted” into joining her.

“There was a real festival atmosphere when we got there and the weather was so nice,” Morag recalled, adding that the group had t-shirts and dressing gowns made up for the day to serve as a reminder of what they achieved on Saturday morning.

“It was an amazing experience. It was so empowering. It was unreal,” Morag enthused.

“We were really nervous, but the atmosphere was unbelievable.

“There were women of all shapes, sizes, ages. It was 2,500 women all together. It was just unreal.

“And there were women drawing on each other - complete strangers doing body art on other women.

“One of them drew the pink bow on my chest, where my breast had been. It was really emotional but it was just unreal.”

The women spent a while singing on the beach and enjoying the festival atmosphere of the event.

“When the time came to run into the water, the noise was just unbelievable,” Morag laughed.

“We legged it in and we had to go in waist deep but then a big wave came in and everyone was screaming and there was so much noise.”

The 16 Longford women - mostly from Kenagh and the surrounding areas, with two from Roscommon - raised over €2,000 for Aoibheann's Pink Tie, which is an achievement in its own right.

And they're still receiving donations from members of the public who are eager to support.

Most importantly, though, it was an incredible, liberating and empowering experience for the 2,505 women who took part.

“I'll absolutely do it again next year,” said Morag. “And I think we'll need a bigger bus!”